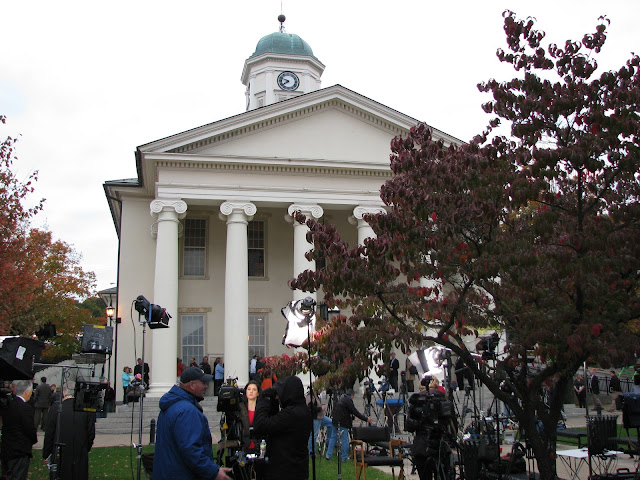 I'm 0 for 2 on trips to Bellefonte in Centre County this year-- two trips there and zero sunshine both times.

Luckily, the Centre County Courthouse is a beautiful building, even on a cloudy day.

A discussion of the events that brought me here has been featured on previous blogs.  There's no need to go over it again.  Above is a shot of the media crush from October 9.

You may ask, "Why is there a fish weathervane at the tip of the cupola?"  According to the book "County Courthouses of Pennsylvania," A second Bellefonte resevoir was built around 1870 in an effort to increase water pressure.  It was up high-- around courthouse level.  Plus, trout fishing was extremely popular in the area at the time.  That's why we see the fish, high atop High Street.

You might be wondering why there haven't been any Sandy blogs this week.  Rest assured.  One is coming tomorrow, and another after next week's election.  Some people will not be happy.  Stay tuned.
AT 12:00 AM