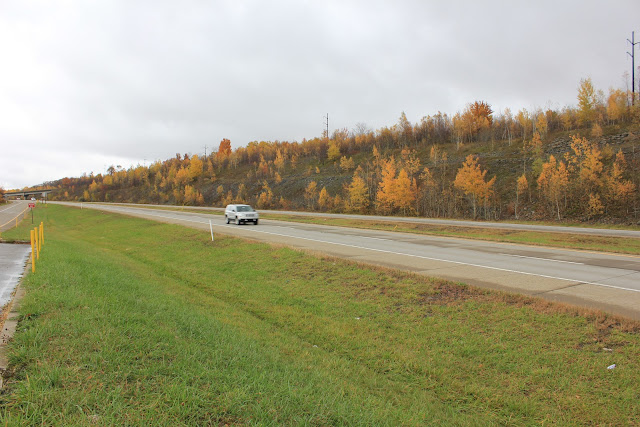 The picture isn't the prettiest, but today, we have more of a concept blog.

The first section of the Lackawanna Valley Industrial Highway, Route 6, the Casey Highway, opened 16 years ago.  It was the eastern end-- from Meredith Street to Carbondale.

I was working down the street at the time, and if memory serves, the ribbon was cut just before Thanksgiving.  Former Governor Casey was there for the ribbon cutting.  He'd been out of office for two years, but he was the one who pushed through the money for the project.

A lot of people questioned the need for the highway.  Time has shown it's a valuable asset.  It's opened up development on the eastern side of the valley, and it's taken some of the traffic away from an overused Business Route 6 on the other side of the valley.

I will never forget an interview I did that morning.  I won't name the public official, now long gone from office.  It was typical of the myopia we frequently see in this area.  This "visionary" was there for the ribbon cutting, but he was actually against the highway.  He feared businesses would suffer because there was now a way to bypass his town.  I nearly dropped the microphone.

We chatted after the interview was over, and I pointed out what happened after the North Cross Valley Expressway was completed in the Wilkes-Barre area.  Kidder Street businesses and those around the Wyoming Valley Mall actually did better AFTER the bypass.  Thru traffic quickly got to its destination, and those who wanted to hit the shopping district were happier because there was less congestion around the stores.  You could get in and out of a parking lot without taking your life in your hands.

I've been in the town bypassed by the Casey dozens of times.  It doesn't appear to be suffering.  I will never cease to be amazed at how some people wind up in public office.
AT 12:00 AM