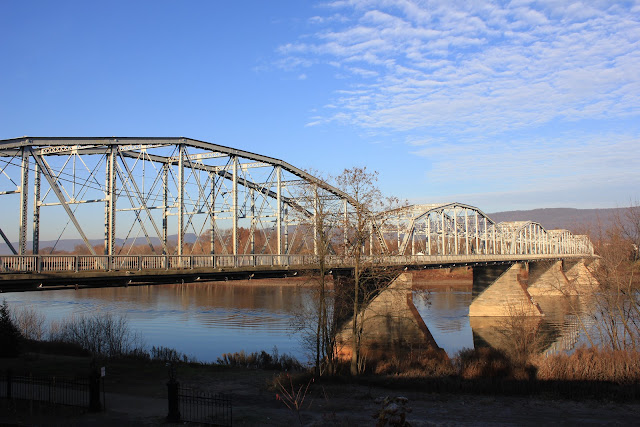 I've often said that people really don't fully appreciate the month of November.  Yes, it can be cold, grey, and windy.  The trees are void of leaves.

On the other hand, we do get some crisp mornings with blue skies and brilliant sunshine.  Things pop against the bleak mountains.  Here's an example-- the Water Street Bridge, also known as the Firefighters Memorial Bridge, between Pittston and West Pittston.

I took this shot just after sunrise on Thanksgiving morning.  Because Thanksgiving is on a Thursday, one of my days off, it's the one holiday I'm just about guaranteed to have free.  As has been my habit in recent years, I've been taking my camera and wandering about before an early dinner.

The river is low.  The water is still, and there's a nice reflection on the right side of the photo.  This photo was taken from the eastern side.