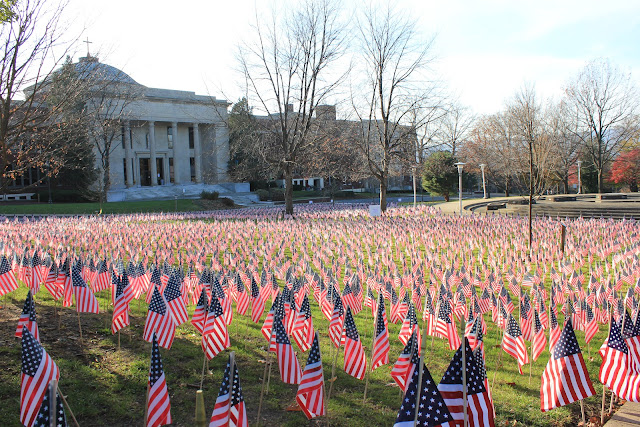 There is a bizarre and illogical school of thought around here that monuments have to be huge and ornate to be impressive.  Case in point, that monstrous sea of granite on Courthouse Square in Scranton.  At one time, there was a plan to build a massive 9/11 monument in Wilkes-Barre's Kirby Park.  It would have been one of the largest on the east coast.  I won't argue the need for a 9/11 memorial.  I will submit that size doesn't matter.  Heart does.

I found a lot of heart on Veterans Day at Marywood University in Scranton.  Full disclosure:  I'm a graduate, but regular blog readers will note I've taken my shots at the old green and white over the years.

A student group organized what you see above, 6600 flags-- one flag in the Memorial Commons for every service man and woman killed in fighting since 9/11/01.  My first reaction when hearing about the Veterans Day display was shock.  Marywood administration always avoided things political and potentially controversial.  One of the organizers told me getting this done was actually rather easy, and she was surprised as well. 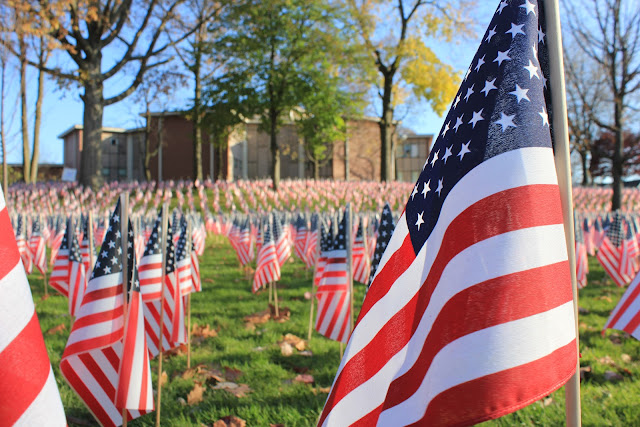 It is all so simple, yet so powerful.  I've seen similar displays before, at Kirby Park and at the Oblates of St. Joseph in Laflin.  The impact has not lessened.

I spoke with a student who is also a military wife Monday morning, for a Newswatch 16 at Noon story.  She said we all know each flag stands for someone who didn't come home, but each flag also represents a family that suffered a loss.  Those families are proud of their sons, daughters, brothers, sisters, dads and moms, but that pain will never go away.

I'm sure we'll see more displays like this in the years to come.  If one comes to your area, make sure you stop by to see it.  It is something you cannot and should not forget.
AT 12:00 AM