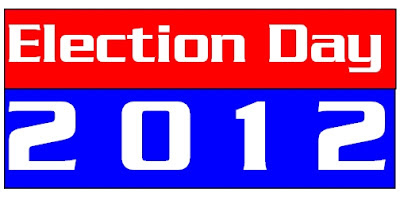 Well, the day has arrived.  It's election day.

The end to the commercials and the speeches is only hours away.

To say the least, it's been a fascinating time.  Few gave Mitt Romney a chance a couple months ago.  Now, many believe he will be the next president of the United States.  Barack Obama will try not to join the ranks of George H.W. Bush and Jimmy Carter-- recent presidents who failed to win reelection.

I remember driving to work on election morning four years ago.  John McCain looked like a long shot, and people were already thinking about what an Obama administration would mean.  You could smell change in the air.  As always, I'll let you decide if the smell was sweet, or if it was an obnoxious stench.

The presidential race has become exceptionally interesting in the last few days.  It's tightened up considerably.  Many "experts" feel Pennsylvania will come down to the Philadelphia area.  A light turnout hurts Obama.  Romney is said to be doing well in the suburbs.  As I pointed out today on Newswatch 16 This Morning, there were more Pennsylvania red counties than blue four years ago.  Obama's strength is in the big cities.  He fails elsewhere.

After the primary, who would have thought Tom Smith had a realistic shot at being elected senator?  Again, polls here show a tight race.  Incumbent Bob Casey seeks a second term.

It looks to be my standard election day-- preview the big races in our morning broadcasts, chase some voters and candidates after that, look at turnout, prepare a story for our noon broadcast, vote, and go home.

I'll try to catch a nap this afternoon so I can stay up to watch TV coverage of the results.

Don't forget to tune in to ABC, WNEP, WNEP2 and WNEP.com for the latest.  There are a lot of people working hard to make sure you get the numbers as quickly and accurately as possible.

I'll try to update the blog and my Twitter page (@AndyPalumbo1228) as the day rolls along.

Please, vote today, and I hope your candidates win.

>>>3:30 AM UPDATE:  Our first update of the day...  The astronauts had their traditional steak and eggs breakfast before a launch.  While I have no election day morning breakfast tradition, I did stop in a fast food restaurant for a spicy chicken sandwich.  It was underwhelming.

I feel compelled to address a story I did yesterday.  It involved high school students reacting to the election, and Bill Clinton starring at a campaign rally at their school.  Some students didn't know.  Others didn't care.  Many were in both camps.  That's just sad.  Okay.  It's permissible to not have an interest in politics, but this is also stuff you have to be learning in the classroom.  Someone's dropping the ball-- big time.

>>>10:30 AM UPDATE:  Live all morning on Harrison and Myrtle in Scranton, where Sen. Casey votes.  Busy.  Other Newswatch 16 reporters and producers say it was heavy where they voted this morning, and that's always nice to see.  Many voters I spoke with today say the economy is the major issue.  I wonder what that means for the incumbent.  Sen. Casey was very reserved and cautious today.  It seemed like he was expecting a squeaker.

>>>1:20 PM UPDATE:   Live at noon at a polling place on North Keyser Avenue in Scranton...  it was busy all morning, until we turned on our camera!  The ballot is short, so voters get it done fast.  Like the other places, it was busy here.  I wrapped up the noon broadcast, then pointed the car north.  I stopped to vote before going home.  I was voter 194, and that's a lot for my little ward in my little town.  Big voter turnouts warm my heart.

>>>6:30 PM UPDATE:  We were inundated by e-mails alleging voting irregularities today.  It's frightening.  I'm having a Vote 2000 flash back.  I joked with the morning crew today that we might not have a winner by the time they're on the air at 5 AM Wednesday.  It might turn out to be true.  I was in a few poling places today, and everything appeared to be going smoothly, but it's a different story when the counting begins.
AT 12:00 AM