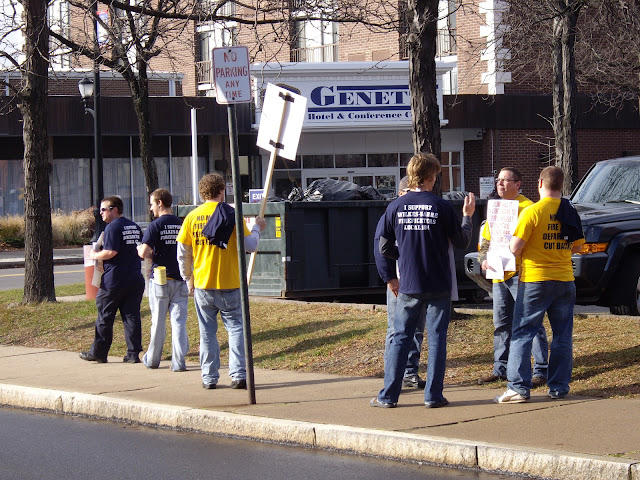 I will preface today's entry by saying I'm not taking sides.  There are no easy answers.

If we all had our way, there would be a fire station in every neighborhood.  Paying for it is another story.

Most of our small towns, boroughs, and townships have volunteer fire companies.  They do a great job.  When they're not fighting fires, they're trying to raise money to keep their companies going.

It's easy to say we have too many-- until there's a major fire.  By the way, these men and women also respond to a myriad of public welfare calls and accidents.  Most of us know we're going home at the end of our shifts.  Firefighters don't have that luxury.

On the other hand, they make good money with a nice benefits package.  As they say in organized crime "This is the life we have chosen."

Will you pay more in taxes to keep the status quo?

The mayor is involved in a political gamble.  Apparently, he feels his hand is strong enough to order the pink slips.  Scranton's mayor learned a lesson the hard way.  The city had a couple major fires right after a round of layoffs.  Those firefighters are back on the job.  Closed Scranton fire stations have been re-opened.

It remains to be seen if Wilkes-Barre has made a prudent financial move, or if the city is whistling past the graveyard.