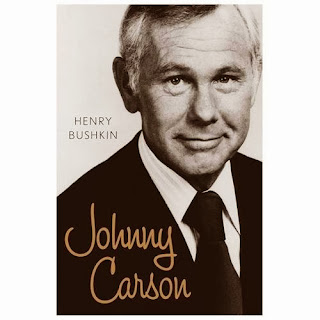 When I finished Henry Bushkin's book on Johnny Carson recently, I felt like I needed to take a shower.

Bushkin was Carson's lawyer and confidante for nearly twenty years.  A lot of the stories Bushkin told in the book should have remained secret.  I realize lawyer/client confidentiality ends when one of the pair passes away.  Still, it was slimey.

Bushkin said he "loves" Carson.  I'd hate to see the result if Bushkin hated him.  There are tales of mental issues, serial infidelity, cruelness, petulance, vindictiveness...  The list goes on and on.

Yes, it was tabloidy and fascinating.  Yet, it was difficult to read that someone you admired so much was so flawed.  Much of what was revealed here really wasn't all that new.  Carson was very kind and generous to a few.  He was cold and distant to many.  To say the least, Johnny Carson was a gifted entertainer and extremely complex.

Overall, I enjoyed the book, but a lot of it made me uncomfortable.
AT 12:00 AM