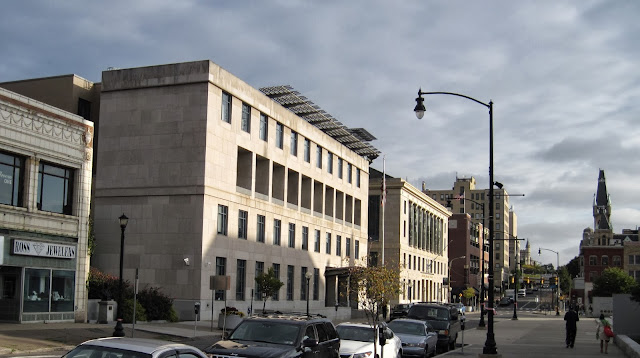 Generally, I'm not a fan of modern structures being tacked on to historic, old buildings.  There are exceptions to every rule.

Scranton's federal courthouse on North Washington Avenue is one case where it was done right.  The new portion is on the left.  The old section is to a right.  An industrial looking atrium connects the two, and it's fun to gaze upward at the steel and stone.

At the time the addition was considered, there were two options.  One was going out the back, and tearing down some very old and non historic buildings.  The other was the one the feds chose-- tear down a filled apartment building with office space on the first floor.  As is the feds' habit, they chose to take down the more productive of the two buildings.