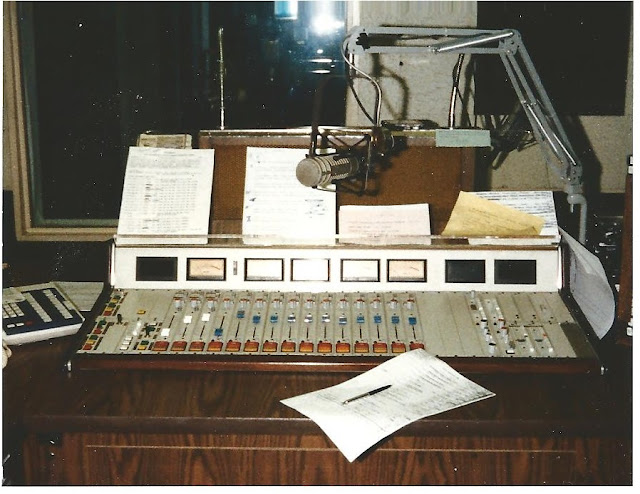 I worked at WARM 590 AM, part and full time, from April 1981 to September of 1991.  It was my first professional employment and I was thrilled to have it.

I walked in the door as a college sophomore, working weekend overnights, running the religion and public affairs shows.  There wasn't much to do-- change the tapes every half hour, straighten up a little, try to stay awake.

I was going through some old photos recently, and came upon this.  WARM's control room went through a renovation in the mid 80's, and this is a shot of the new "board."  Some might call it a mixer.  It was the analog control panel of the radio station.

I'm guessing it was taken in 1987, maybe sooner.  I know I was on the air because I recognize one of my pens in the shot, a PaperMate Profile.  It sits on top of the paper program log.  This was simply a list of commercials that had to be played, and things you had to do, such as sports and public service announcements.

The easel on top of the board was for the forecast, memos, live commercial copy, etc.

The big window looked out into the newsroom and the lobby.

I remember my first time looking at the board.  It was set up in a back room for a while so we could get used to it before it was installed in the main control room.  There are a lot of sliders and buttons there, and it was rather intimidating.  After you got used to it, it wasn't so bad, and it was much better than the ancient piece of equipment it replaced.