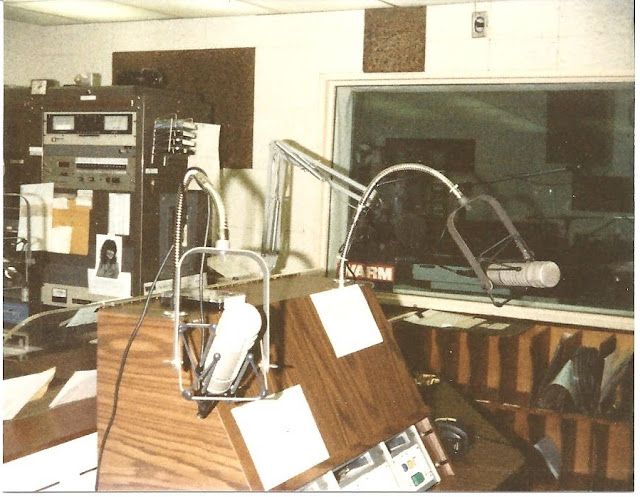 This is the other part of WARM 590's control room, circa mid/late 80's.  This is the side used by the news people.

During the 80's renovation, a second news microphone was installed so we could co-anchor newscasts.  The news podium was directly across from the control board I showed you yesterday.

I hated those microphones.  The mounting was awkward, and we never sounded quite right.  They were later replaced with another brand and another way to mount them.  It improved-- a little.

Built into the bottom of the podium is space for three cartridge machines.  This is how replaced reporter stories and sound bites from newsmakers.  They were start of the art at the time, but they made a lot of noise when you hit the start button, and the tape inside occasionally malfunctioned.  The cart machines, too, were replaced in time.  Unfortunately, the machines were bigger and didn't fit in the slots.  The new cart machines were placed off to the side, complicating the operation.  You had to hit a remote start button, and pray you selected the right one.

The big thing on the left is one of the equipment racks.  This is where we monitored the output of the transmitter, took the readings, and switched the directional antenna pattern at sunrise and sunset.

Someone taped up a photo.  I don't remember who it was.

The big window on the right looked into the production room, which also doubled as a talk studio.

Beneath the window is an album rack, a remnant from a bygone era.

WARM moved out after I left for a job at the old channel 22.  The building is now headquarters for that Avoca Interstate 81 interchange improvement project, also known as a solution in search of a problem.

I can't believe it's been 22 years since I left.  There were good times and bad here, but I value the experience.
AT 12:00 AM