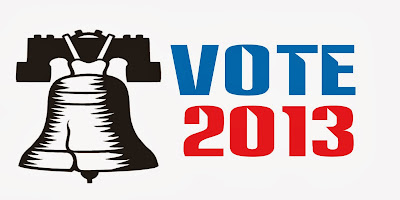 It's an off year election, and traditionally, turn out is low.  That's sad.  Electing mayors, councilmen, and school board members can have a bigger influence on your life than senators, representatives, and even the president.

As with all election days, I'm pumped.  Election days are the Super Bowls of the news business.  I'll do my standard thing-- preview some big races, check turnout, file a report for the noon broadcast, and hand things off to the rest of the staff to do the really hard work-- get the numbers, and tell you what they mean.

Time permitting, check this space for an update or two or three during the day.  I'll try to tweet once in a while @andypalumbo1228.

>>> 3:00 AM UPDATE:  For some reason, a Wendy's spicy chicken sandwich breakfast at a truck stop has become an election morning tradition, and today was no different.  It's usually busy at 2:00 AM.  Today, I had the place to myself.  When I hit the office, I tweaked a script due to some late developments.  My task now is to check logistics-- ways to get video of the most candidates and the most voters in the most efficient amount of time.  It can be done.

>>>8:00 AM UPDATE:  Temporarily back in the office after a cold morning at Scranton polling place at Robert Morris Elementary.  Interesting times-- Chris Doherty and James Mulligan voted minutes apart.  It was a case of the soon to be past meeting the possible future.

>>>10:45 AM UPDATE:  Hanging out at a polling place on North Keyser Avenue in Scranton for a while-- beautiful day for early November. Turnout here ins't great. It's easy to get a spot in the parking lot, and that's rare. As I tweeted a short time ago, there are more people handing out cards and stickers than voters. Mayoral candidate Courtright says he's heard this is among the busier polling places in the city.

>>>1:45 PM UPDATE:  The noon live shot went off smoothly.  I actually liked the piece-- one current mayor and the two who want to replace him.  After that, it was back to the office to tie up a few loose ends, and then, home, with a stop at my polling place on the way.  I was voter # 100, and the poll workers say that's on the low side.  They expected more because it's a local election with plenty of dissension   I just get the feeling people are fed up and staying home.  The nonsense in Washington has to be playing a role.

>>>7:30 PM UPDATE:   Really not much to say...  snoozed the afternoon away, got up, checked some Tweets.  Most say turnout today was disappointing.  I'm going through some photos I took today for tomorrow's blog while waiting for the polls to close.  It really shouldn't take long for trends to develop.