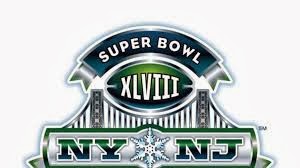 It was rather easy to pick the team I believe will win Sunday night's Super Bowl XVIII in New Jersey.

The point spread is just about even.

This is the fifth time the best offense has met the best defense.  The defense has taken three out of four.

Keep in mind, I have no idea what I'm talking about.

I haven't seen a Super Bowl since 1999, and I'll be asleep for this one.  I'll learn the winner when I wake up to come to work.

I'll be lucky if I can catch some of the Kitten Bowl on Hallmark and the Puppy Bowl on Animal Planet.

As always, spare me the "commercial" discussion.  An ad is an ad.

By the way, all the gimmicks have done nothing to help the Pro Bowl.  Get rid of it.

I hope this is the last time the NFL chooses an outdoor cold weather site for the Super Bowl.
AT 12:00 AM