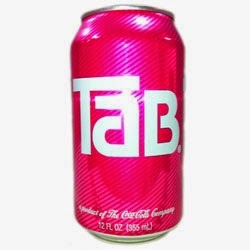 I was walking through one of the big box stores on a recent morning when I spotted 12 packs of Tab tucked on to the shelves.

A little history-- Tab, manufactured by Coca Cola, was one of the first of the diet colas, way back in the early 60's.  It was aimed at the female dieters crowd, but anyone looking to cut back on sugar and calories grabbed a can now and then.

Tab has an unforgettable taste, and it was the last of the sodas to use saccharin.  In fact, a read of the label still shows saccharin as one of the main ingredients, although there are some modern sugar-less sweeteners now in the mix.

That unforgettable taste of Tab in the old days I referred to?  It was like a mouth full of chemicals.

I'm surprised Tab is still around.  Diet Coke, beginning in 1982, stole all the thunder-- and the sales.

I let curiosity get the better of me, and I threw a 12 pack in to my cart.

So, how is Tab 2014?  It still has that unmistakable saccharin flavor and after taste.  It doesn't appear to be as harsh as the old days, but it's still there.Tab isn't great, and it is tolerable.  I'll finish the 12 pack, but it will be a while before the Tab nostalgia itch needs scratching again.
AT 12:00 AM