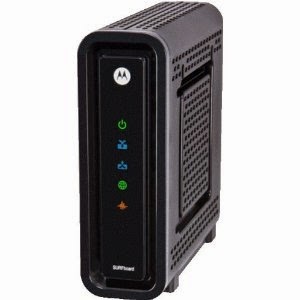 I opened an email from my internet service provider a few weeks ago.  It said due to system upgrades, I really should acquire a new modem.

I will admit that my current modem was an old one, so old, I bought it at Circuit City.  I liked it and it was working fine.  My philosophy on things technical is that if it's working well, leave it alone.  I do have some skills around a computer, enough to get by, but If I don't have to mess with it, I won't.

As always, when faced with technical issues, I consulted the engineering and IT staff at the station.  Some were ambivalent on a new modem.  A couple thought it was a good idea, so I went for it.

There was some on-line modem research time, and a call to the cable company.  I could lease one for $ 8 a month.  The advantage is that I get a new one for free is something goes wrong.  On the other hand, a purchase would pay for itself in nine months.

I found the model I liked in a big box store.  Next thing I knew, it was in my cart.  I was through the check out and home.

Installation was rather easy.  Remove the old one.  Plug in the power cord, the ethernet cable, and the coax.  Boom!  Done!  There was an alleged way to activate it on-line.  It wasn't working.  It was then time to do what I despise most:  call customer service.

I don't like outsourcing, but it's a way of life and I just have to deal with it.  It was clear that the person I called was in a foreign land.  She might have been a smart woman, but her English language and communication skills were severely lacking.  She couldn't complete the process.  I was given another telephone number to call, at an office that opened after 7 AM, EDT.  I called, talked with another gentleman from another land, and got the thing hooked up, up and running in about ten minutes.

Note to companies that love outsourcing:  Please insist that the workers have adequate communication skills.  It was frustrating enough to almost prompt me to find another service provider, but show me one that's all USA, all the time.  Different company, same issues.  It was a hassle I didn't need.

By the way, my internet is indeed faster.

Having said all that, if an annoyance over hooking up a new modem is the most of my problems, I should consider myself very lucky.
AT 12:00 AM