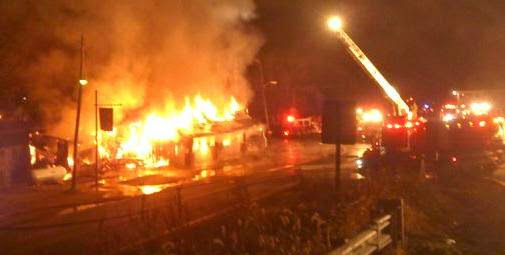 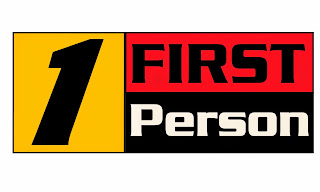 I was sitting at one of the producer stations at WNEP at 3:15 Tuesday morning, putting the finishing touches on a couple of murder trial stories-- reviewing the prosecution, previewing the defense.  I had been in the office about 45 minutes at the time.

My murder trial stories were shelved because breaking news is why we're here in the morning.  Photographer Jason and I looked at a map and figured out the fastest way to get there.  We loaded up a satellite truck and headed north.

About 45 minutes later, we reached our destination.  You could see the glow miles away.  Jenny Leigh's Country Cookin' restaurant was burning to the ground.

The clock was ticking.  The 4:30 AM edition of Newswatch 16 was rapidly approaching.  Thanks to a cooperative fire policeman, we negotiated a parking space that was far enough away to be safe, but close enough to see what was going on.  I snapped the photo you see above for WNEP.com while Jason shot video.  We converged back at the truck, deployed the satellite dish, and made the 4:30 AM broadcast with seconds to spare.

A series of live reports followed, encompassing the fire fighting efforts, and the aftermath.  Jenny Leigh herself was kind enough to speak with me on camera, a remarkably composed woman, especially under the circumstances.

When the fire was out and the smoke cleared, you could see there was nothing left.

Fire fighting here is a challenge.  It's a lovely, rural area.  Unfortunately, there are no fire hydrants, and there is no neighborhood fire station.  The firefighters did the best they could.  The fire was in an old building, and it had a good start.  It added up to disaster.  They will never find the cause because of the amount of damage.  It's not suspicious.

Jenny Leigh vows to rebuild.  She seemed like a very nice woman.  A lot of people are pulling for her.
AT 12:00 AM