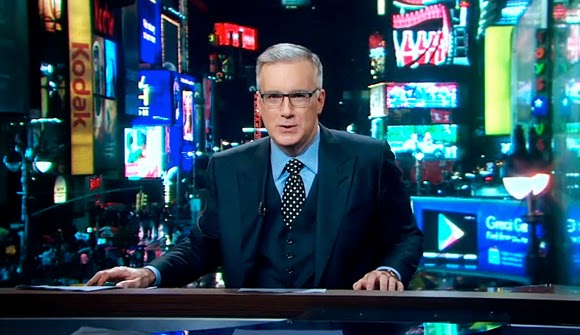 I have a love/hate relationship with Keith Olbermann.  I hated the guy when he was with MSNBC and Current.  Too mean.  Too snarky.  Too biased.  Yes, I know his job was to be biased.

I reacted with glee when MSNBC fired him and the Current job fell apart.

I read all the negatives, that Olbermann is full of himself, he's difficult to get along with, and treats underlings with a lack of dignity.

Things began to turn around for me in July of 2013.  Keith Olbermann returned to the ESPN family with a sports show that played to all his strengths.  Commentary.  Interviews.  Highlights.  It's a fun show to watch, and it appeared Olbermann is actually having fun doing it.  It was a complete 180 from Mean Keith we saw on MSNBC and Current.  The show aired in late night.  It's now on in the late afternoon.  I catch the early morning replays at the gym, and it's must see TV.  Olbermann is at the top of his game when something big is going on, like the NFL's botched response to domestic violence situations and Ballghazi.  The bigger the story, the sharper the commentary.  I am in awe of his writing ability and the way Olbermann can dissect a story, using the subject's own words to make his case.

That brings us to today.  ESPN suspended Olbermann for the rest of the week after he got in to a Twitter war with some Penn Staters.

Let's move on to that for a moment.  There is significant evidence to indicate the former powers that be had the ability to put the screws to Jerry Sandusky a long time ago, but they were more concerned about football and image.  They could have prevented the abuse of children, some on Penn State's campus, and did nothing.  In fact, there's evidence to indicate a cover up.

I can understand Keith Olbermann's anger about Penn State and the people who ran it.  That includes the NCAA, who recently backed away from a long list of Penn State sanctions and penalties.  I'm angry myself.  Edmund Burke said it perfectly:  "The only thing necessary for evil to triumph is for good men to do nothing."  There can be some debate about what constitutes "good men."

However, engaging in a Twitter was with students who just raised $ 13 million to fight cancer in children is wrong.  Misplaced anger.  Stupidity.  ESPN saw that.  Olbermann eventually saw that.  Too late.