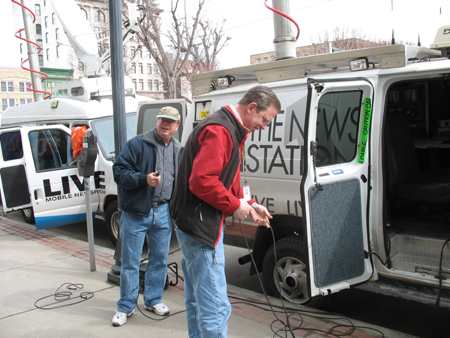 It's more than the end of a month.  It's the end of an era.  Nick Horsky leaves WNEP today, after 35 years on the job.  He was at the old WDAU before that.

That's Nick above, on the left.  I took the photo during the Hazleton Immigration Ordinance trial in Federal Court at Scranton.

Let me tell you about Nick.  He was the fastest and most efficient photographer I ever worked with in my 25+ years of television.  I remember one morning, several years ago.  We were at the University of Scranton, doing the "kids moving back into the dorms" story at the start of the fall semester.  We followed around one family.  I think they were from New Jersey.  Everyone at the U is from New Jersey.  Anyway, they were a great bunch.  The daughter was nervous.  So were the parents.  They were keeping their emotions in check, not wanting to worry each other.  Still, I remember a tear or two.

Nick had this fantastic ability to know exactly how much video was needed for a story.  He never under-shot.  He never over-shot. 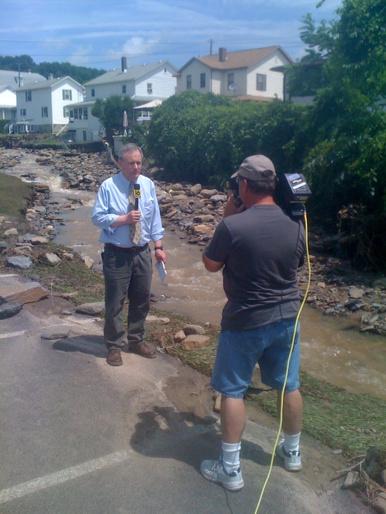 Above, Nick and I covering flash flooding in Plymouth, four years ago this week.  WNEP photographer Mike Erat took the picture.

Nick was the man you wanted around at deadline time.  I don't think I've ever seen someone edit a story faster.  It didn't make a difference if he was using video he shot, or if the video came from another photographer.  When you worked with Nick, you made your slot.

Here is where I will especially miss Mr. Horsky.  No one broke down a live shot faster.  Seconds are at a premium, especially at the end of your day.  Nick did some of my noon live shots.  The equipment would be stowed, the mast would be down in no time, and you'd be on your way back to the office.

I will miss Nick's talents.  I will also miss his common sense presence in the newsroom.

Photographers don't get nearly the credit they deserve.  You were better informed because Nick Horsky worked at WNEP.