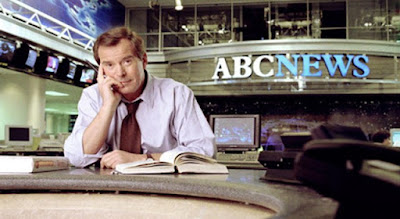 Today marks the 10th anniversary of the death of Peter Jennings.

Several months prior, it was clear something was wrong.  Jennings was missing from big events, like the Indonesian earthquake and tsunami, the death of one pope, and the selection of his successor.

Then, Jennings made the announcement in April of 2005.  Lung cancer.

I walked in to the office early in the morning of July 8.  I asked Producer Heather what was new because I hadn't turned on my home computer that morning.  She replied that Peter Jennings had died the night before.

I watched the network morning broadcasts with mixed emotions.  I love old TV news, and Jennings had quite the resume-- anchor, a failed morning show, foreign correspondent, anchor again...  It was a celebration of his work, and it was excellent stuff.  However, there was one reason we were looking at it.  The man responsible was dead.

Sad to say, but I didn't fully appreciate Peter Jennings until after he was gone.  Read his life story.  After two anchor failures-- one on the evening news in the 60's, the other on AM America, the predecessor to Good Morning America, he set out to learn the world.  It was clear on major stories.  Peter Jennings had a head full of information on how Europe functions.

His delivery was smooth and relaxed.  Very easy to watch.  He had all that knowledge, but Peter Jennings didn't come off as haughty and pompous.

Born in Canada, Peter Jennings became a dual citizen in 2003.  What impressed me the most-- he carried a small copy of the U.S. Constitution in his pocket.
AT 12:00 AM