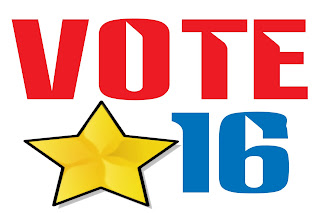 The presidential election is 462 days away, and I fear people will be sick of the process long before we reach Tuesday, November 8.

I know candidates have to jump in early to raise the massive amount of money needed for a run.

Thanks to Donald Trump's statements, and the constant could over Hillary Clinton, political news has been dominating the headlines recently.  I'm okay with that because I find politics a fascinating sport.

However, it probably turns off the casual observers.  We have 17 months of speeches, glad handing, debates, and commercials.

You'll see a spurt early next years for the early primaries and caucuses.  We'll likely see some candidates withdraw when the money dries up.  Momentum is a cruel mistress, and those who stumble out of the starting blocks are sunk.

Recent history has taught us the parties will have settled on nominees well before the summer conventions.  The parties would hate for messy scenes, broadcast to the world, from Cleveland and Philadelphia.

Then, it's the sprint to November 8.

It would be nice to see Pennsylvania remain in play.  Candidates would actually have to stop here to plead their cases.  Even though the peak of 38 electoral votes in the 1920's is ancient history, 20 is nothing to sneeze at.

It's disturbing to see that most of the recent election news centered on polls.  I fear many in the media say "There's nothing happening this week.  Let's do a poll."  Even my eyes tend to glaze over at endless polling data, unless something interesting jumps out, like the Trump surge.

There's a long time between today and election day.  Let us inform you, but not overwhelm you.  Please, stay interested and stay informed.
AT 12:00 AM