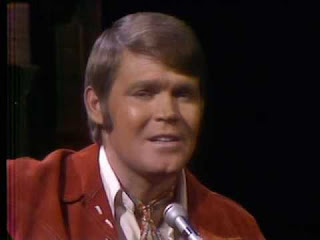 Many years ago, there was a limit on the amount of commercial time radio and television stations could broadcast per hour.  During my radio days, it was 18 minutes.  There were many hours my station hit the limit.  I wasn't in TV at the time, so I can't tell you what the regulations were in that medium.

When the federal government deregulated much of broadcasting, the commercial limits went out the window, giving birth to the infomercial.  I don't watch many, but I have to admit there were a few that were entertaining.  A personal favorite was a British guy painting walls with pads rather than brushes and rollers.

The other night, I stumbled across a Glen Campbell infomercial on one of the Public TV station digital sub channels, and it entertained the socks off me.

As I told a coworker, it was an oasis of wholesomeness in a tumultuous time.  Vietnam was going strong.  Violence in the cities after the MLK and RFK assassinations.  Watergate was just beginning.  The country was changing, and not in a good way.

For that one hour a week, on Sunday nights, Glen Campbell sang and laughed his way through the evening, with a strong supporting cast.  Watching that infomercial took me back to simply being a kid-- when your biggest worries were elementary school homework assignments, finding a lost Wiffle ball in the back yard, and getting your Frisbee out of the neighbor's tree.

No, I didn't purchase the DVD's, but it was tempting.   You can buy the music.  Unfortunately, there's no way to buy back your youth.
AT 12:00 AM