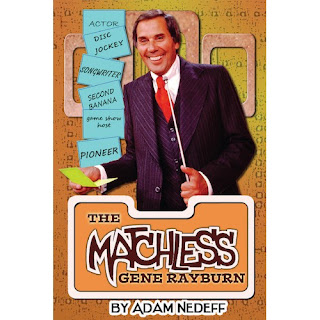 I intended to nibble away at "The Matchless Gene Rayburn" during my vacation.  It didn't work out that way.  I devoured it in two days, and it's a rather thick book, with small print.

You have to understand that "The Matchless Gene Rayburn" is in my wheelhouse.  It deals with some of my favorite subjects-- TV and radio history, old game shows, and Gene Rayburn.

Author Adam Nedeff does a meticulous job of chronicling Gene's life, from his birth in 1917, to his passing in 1999.  He does it by speaking with Gene's daughter, Lynn, plus friends, including Peter Marshall of "Hollywood Squares" fame.

It's not a pretty story.  Rayburn lost his father and brother at an early age.   He had an unhappy childhood.  There were several career setbacks, and some rather sad final years-- plagued by money and health problems.

Rayburn actually helped write the book.  He was preparing an autobiography, but dementia eventually stood in the way.  Nedeff did have access to Gene's notes, and there are direct quotes throughout the book-- items that would have been included if Gene had the opportunity to write his own story.

I want to say I enjoyed every page, and one one level, I really did.  However, it was difficult reading about Rayburn's disappointments.  He always wanted to be an actor.  Broadway.  He did some, but not enough to make him happy.  Rayburn wanted to be known as more than a game show host.  It never worked out that way.

Gene Rayburn was a true pioneer-- from his days in radio, to taking "Match Game" and making it his own.

Even though I knew quite a bit about Rayburn's career, there were some revelations-- including how he thought "Match Game" had a "rotten" format, and emphasizing the comedy saved the show.

Also, "Match Game 73" came along when Rayburn was 55 years old-- proving that you are never too old to take on a new challenge.

If broadcasting history and game shows are your thing, you'll love "The Matchless Gene Rayburn."  If you're just looking for a good biography of an interesting man, you'll love it, too.
AT 12:00 AM