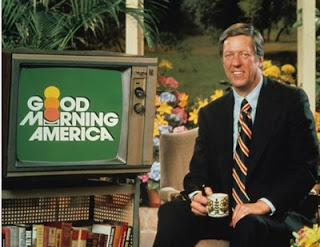 Next week will be tied up with election stuff, so I'm doing the anniversary piece now.

GMA really was the morning show game changer, in so many ways.

David Hartman and Nancy Dussault were the first hosts-- a pair of actors, and that was unheard of at the time.  GMA was originally produced by ABC's entertainment division, not the news division.  The whole thing proved you really didn't have to be a journalist to handle a morning show.  You did have to show some genuine warmth and curiosity.  David Hartman really had that.  He was a friendly face in the morning, and you can't underestimate the value of that.  In the early days, Hartman was teamed up with ABC News' Steve Bell for the serious interviews.  When Bell eventually left, Hartman referred to him as "my teacher."

GMA's premise was simple-- the news of the day, plus things to help your life.  ABC established a stable of contributors, and it worked nicely.  The set was filled with plants-- a stark contrast to the sterile Today show on NBC and the even more sterile CBS Morning News.  Some say you can't be all things to all people, but GMA came close back in those days.

GMA has evolved quite a bit since those early days-- more slick, faster paced, more celebrity news, a lot of music, Times Square...  I miss the hard news.  Luckily there are other places to get that, and I do realize tastes and viewing habits change.

GMA was actually ABC's second morning effort.  The first, AM America, with Peter Jennings as the news reader, failed in less than a year.

Morning television is a fascinating business.  The news division now runs GMA.  The show survived after the Kevin Newman/Lisa McRee fiasco.  I still believe it wasn't a host issue.  It was a producer issue.  The show had no direction and those running ABC at the time didn't know what they wanted GMA to be.  Luckily, the network had Charlie Gibson and Diane Sawyer willing to climb on board (Charlie's second stint) to right the ship.