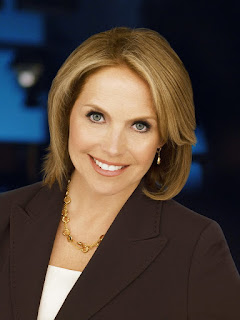 Every once in a while,someone says something that just stuns you.

Katie Couric told Fortune magazine that she tried to do too much, too soon during her time as CBS Evening News anchor.

She thought it was a shock for CBS viewers to see a woman in the anchor chair.  I think that's a joke.  Women have been in major anchor roles for a long time.

Couric also admitted she should have been more political and "sucked up" to the right people.  Hello!  Couric had the blessing of the head of the network.  It doesn't get much more "right people" than that.   Couric made $15 million a year at CBS.  And now, you're complaining?

It comes down to this.  She wasn't lousy at her job.  Simple.  That's it.  Katie Couric was a very good morning show person.  Believe me, that's tough.  I have a great amount of respect for those who do it well.

Evening news anchor?  No.  It wasn't her thing.  Couric and her producers badly misjudged what viewers want.  She couldn't relate to the audience.  Insiders will say she didn't relate to the staff, either.  After Couric left, the sign on the Evening News offices was changed from CBS Evening News with Katie Couric, to CBS Evening News with "all of us."  By the way, CBS went back to a more traditional approach, with Scott Pelley in the anchor chair, after Couric left, and the ratings went up-- a lot.

Couric, after her talk show flamed out, became global news anchor for Yahoo.  When was the last time you clicked on any of her stuff?