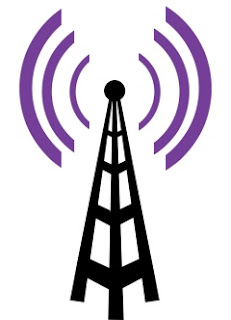 Today, a story about the dysfunctional nature of state government, federal government, and American business.

Regular blog readers will know I've been whining about AM 1640 in the Scranton area for months.  It's one of those travelers information stations.  Their existence is noted by signs along the interstates.

1640 in the Scranton area had been down for months.  When it was up, it was rebroadcasting the forecast provided by National Weather Service radio.  I loved it.  It was a forecast and the current temperature, all the time.  It had a button on my car radio, and it was the first thing I hit, every day.

When the station fell silent several months ago, I complained to the local Penndot office.  There was a promise to investigate.  Weeks passed.  I e-mailed my state representative.  Nothing.  Not even the courtesy of  a "we received your e-mail" response.  I complained to Penndot in Harrisburg.

It appears the Penndot Harrisburg guy got back to the local Penndot guy, and this is what I've learned.  AM 1640 is for emergencies only.  It wasn't supposed to be rebroadcasting National Weather Service radio because the Federal Communications wouldn't allow it.  The reason?  below is a quote from the Penndot response, and that's a quote from the FCC case.


The chief opposition to the authorization of TIS operations originally came from
commercial broadcasters who argued that it would duplicate information provided by commercial
broadcasts, siphoning off advertising revenues.

By the way, TIS stands for travelers information station.

All Highway Advisory Radios (HARs) are regulated by the Federal Communication Commission (FCC) in accordance with 47 CFR § 90.242 (Travelers’ information stations).  In 2013, the FCC released new rules for HARs which restricted the broadcast of “routine, non-emergency information" including NOAA weather forecasts.  Subsequently, the FCC received a number of petitions asking the Commission to reconsider its decision on the basis that such weather information would help travelers to plan their routes.  In 2015, the FCC reaffirmed the restriction concerning the rebroadcast of routine NOAA weather by stating the rebroadcast of weather information is restricted to periods of unusual or extreme events.  To reflect the FCC’s decision, the broadcast of “routine weather information” has been prohibited in PennDOT’s standards.  Although we understand your concerns, PennDOT must adhere to the FCC’s ruling.

Let's examine this a little more.  The reason I loved AM 1640 because it's nearly impossible to get a forecast from a commercial radio station around here.  At best, they deliver the weather twice an hour, and that's only during the day.  Most stations have some sort of computer controlled automation at night.  No humans.  Possibly, you get a recorded, old forecast in the middle of the night.

I'm proud to be a broadcaster.  It's all I ever wanted to be.  Unfortunately, I feel my radio brethren are way off base here.  Do they really think a series of pea shooter powered AM radio stations, broadcasting the droning computer voice of the National Weather Service, will hurt their bottom line?  I wish you could see my skeptical raised eyebrow right now.

AM 1640 is now silent once again, unless there's a traffic jam or some other emergency.  I hope someone remembers to turn it on.

In the meantime, I'll be reaching for my smartphone.
AT 12:00 AM