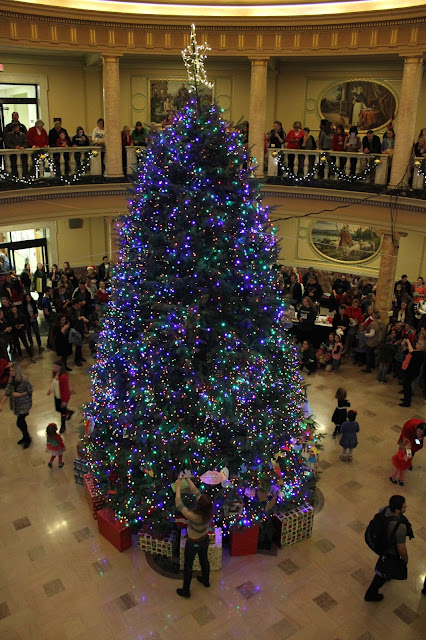 People who drop by this space on a regular basis know it is one of my few holiday traditions-- a trip to my alma mater, Marywood University (it was a college when I was here) to watch the Christmas tree lighting in the rotunda of the Liberal Arts Center.

For my first three years as a student, they decorated a tree outside, and that was nice.  The rotunda tree made its debut when I was a senior.  I didn't go that first year.  Don't ask me why.  It was a long time ago.  I'm guessing I was working at WARM at the time.  In fact, I don't remember ever seeing that first tree.  I loaded up on credits my first two years, and attended classes every summer.  By the time senior year arrived, I was rarely on campus.

I also blew off the first several years of the rotunda tree tradition.  Don't ask me why again, but I started going back about ten years ago, maybe more.  Maybe a little less.  It's a nice shot of Christmas, and I really like how Christmas at Marywood doesn't get rolling until AFTER Thanksgiving.

This year was a little strange.  Just before I left for Marywood, I was watching the San Bernardino shooting tragedy unfold on television.  I arrived on campus the the scene you above-- joy, happiness, innocence, fun, holiday.  180 degrees from what I saw on my TV.

There was actually one stop between home and the rotunda, and I'll have a few words on that next week.

As I walked in to the Liberal Arts building, I noticed quite a few security guards out front.  I'm not sure if that was because of world/national events, a recent Marywood bomb scare, or they just wanted to make sure no one parked illegally.

I know nothing as simple as a Christmas tree (even a big one) can take away the sorrow over San Bernardino, but, at least thousands of miles away, it was a few moments of happiness-- the music, the lights, the joy of the children running about on the rotunda floor below.

Before all this started, I intended to use the opening line of "Let's give the weighty issues of the day a rest for a moment..."  Sorry.  It can't be done.  Not now.