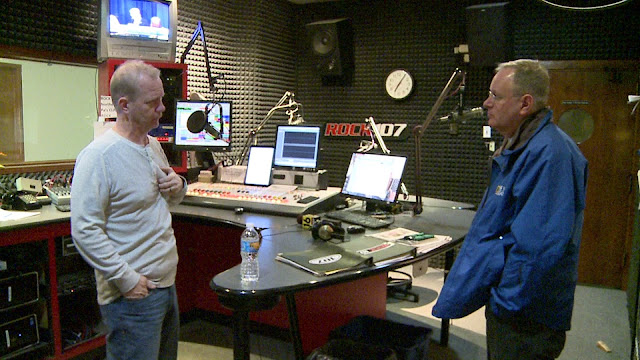 I'm sorry that my trip to Rock 107 in Scranton was to do a story on the death of Eagles co founder Glenn Frey, but I enjoyed the visit nonetheless.

Regular blog readers know that radio is my first love.  My first air shift on my college station was in December of 1979.  A job playing religion and public affairs shows at WARM began in April of 1981,  I stayed at WARM for nearly eleven years.  I saw the station declining, with less of an emphasis on local news, so I jumped over to TV-- part time in March 1990, full time in September 1991.  You know the rest.  TV has provided a nice living, and I still enjoy doing it.

It's still a kick to hang around a radio station.  It reminds me of what attracted me to the business in the first place-- the immediacy, the spontaneity, the electronics, the magic of a voice going through wires and circuits, up a tower, out an antenna, so thousands can hear it.

Radio studios look a lot different these days.  No vinyl.  No tape.  Nothing mechanical.  Everything is computerized and controlled via touch screen.  It's fascinating.  However, the basics haven't changed.  Relate to the audience.  Entertain.  Inform.  Think.  Talk.

Thanks to Rock 107's morning man, The Prospector, for letting us drop by on short notice, for sharing his opinion on the musical influence of Glenn Frey and the Eagles.  His comments were the hook for an entertaining piece that ran Tuesday afternoon on Newswatch 16.
AT 12:00 AM