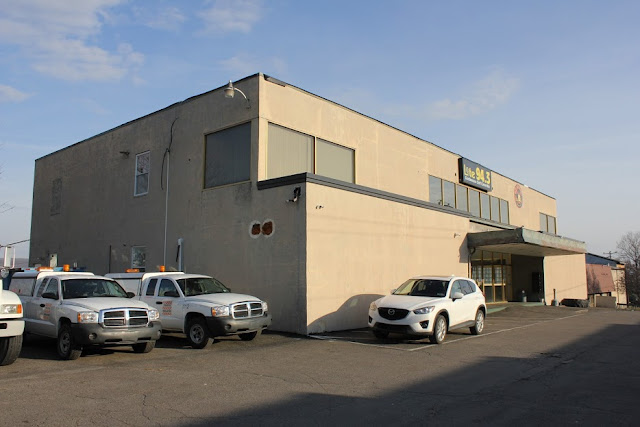 One last view of the former WARM Building in Avoca before I move on to other things.  I worked here from 1981 to 1991.

Back in my day, I remember writing a note to the general manager, asking for better security lighting.  Nothing happened.  Even though WARM moved out a long time ago, it appears the lighting situation is the same.  It's just one lonely and useless street light screwed on to the side of the building.

One of our program directors wanted a better sign out front.  All we had were some barely visible call letters on the canopy.  The sign never happened.  I think there was some push back by the guy who owned the building at the time.  Thousands of cars passed this building every day.  It was a wasted opportunity.

I'm not sure when Lite 94 moved in, and moved out.  The circular sign is for a wrestling club.  It wasn't around during my era.

Not many people know, but this is actually a four story building.  It's built in to the side of a hill, so there are two floors below ground level, and one above.  The Economic Development Council and the Northeast Philharmonic used to call this place home.  Both are long gone.

The canopy used to be shiny metal.  It's tarnished now-- much like the radio station that called this home.