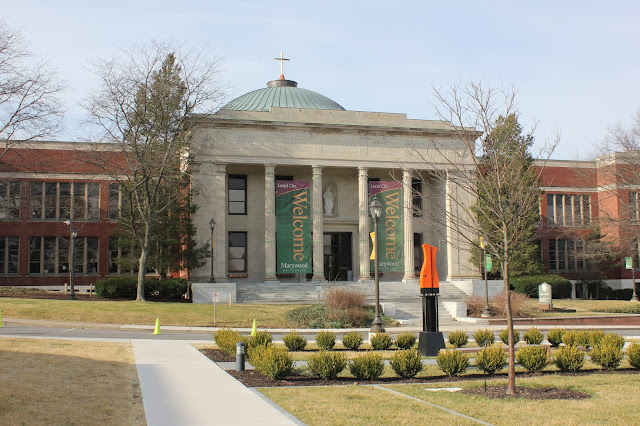 Congratulations to my alma mater, Marywood University.  It was Marywood College back in my day.  It did something right.

It takes effect in July.

Sister Mary and I go back a long way.  She attempted to teach me to speak French during the fall and spring semesters of my freshman year.  I reminded her of that during a meet and greet/q and a session at Marywood Tuesday afternoon.

I walked up to her when it was over, and spoke a few of the French sentences that I actually remember.  Her eyes lit up.  She responded with even more French, and I was actually able to craft another sentence of my own.

We had a nice talk, in English.  I hope we'll talk again in the near future.  Sister Mary expressed her willingness.

Here's how I know she will be a good president.  First, she is patient.  I learned that 37 years ago.

The q and a session was impressive.  Sister Mary grasps what needs to be done.  She will take input, then make decisions.  She does realize that in the end, she makes the calls. She is the one to lead.

I told her there is a tough job ahead.  A lot of us want the quiet, dignified Marywood of the past, but the school also has to be nudged in to the future.  There was an affirmative nod after that comment.

Marywood's financial problems have been documented elsewhere.  Students are unhappy.  Faculty is unhappy.  Staff is unhappy.  There's a study underway to determine what programs should stay, and what ones Marywood can do without.

Here's what sealed the deal for me.  Someone asked if potential cuts will be painful.  Sister Mary's response:  "Absolutely."
AT 12:00 AM