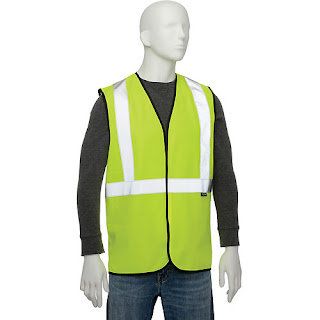 I haven't prattled on about my bicycle adventures lately...

As has been noted here before, I usually ride in the dark.  My bike has a light and reflectors, but from the beginning, when I bought the bike four years ago, I have been wearing a reflective safety vest.

I thought I was over-doing it...  until I was driving home from the gym early in the morning last week, and I saw another bike rider wearing a vest.  It really makes a difference. To the guy on his bike along North Main Avenue in Scranton, bravo and kudos!

You can buy vests in stores like WalMart.  They're very inexpensive on-line.  If you're riding or jogging at night, GET ONE!

Up until recently, it's been rather cool at night.  A couple of weeks ago, I went pedaling in a fleece jacket, with my reflective vest over it.  Toward the end of my ride, I became really overheated, but I toughed out the last few miles.

I got on-line a few hours later and ordered a windshirt and nylon bicycle jacket.  It's bright blue with reflective piping and accents.  The stuff arrived in the mail recently, and what happens?  It turns hot!

I'm sure the new clothing will come in handy this fall.
AT 12:00 AM