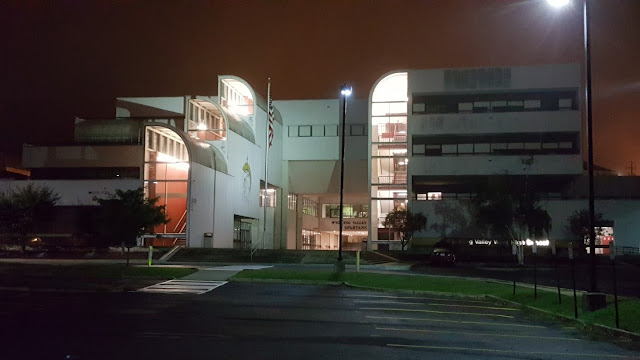 I spent most of my Monday at Wyoming Valley West High School in Plymouth.  To quickly get you up to speed, the middle school in Kingston has mold.  It's been closed.  The district is doubling up students here at the high school.  High School runs from 7 am until noon.  Middle schoolers take over from noon until 4 pm.

I talked with several high school students on their way in.  They were all tired, but they understood the situation.  A few were worried their education would suffer.  Periods are cut to 30 minutes.  The superintendent told me the schedule might be tweaked to emphasize the basics, and that doesn't seem like a bad idea.

My high school was split between two buildings.  One was absolutely awful.  The other was even worse.  We sweat like pigs in the fall and winter.  The solution in my home room was to cover up the giant air duct with cardboard to keep the heat out.  There was a tiny flap cut out to get a little warm air in when we needed it.  My home room teacher would open and close it with the help of a yardstick or pointer.  Above all, it was a fire trap.  The state finally realized it in February of my sophomore year and condemned the building.  I wish you saw my happy dance.  I hated that building since I spent one grade on the elementary side four years prior.

Right around the same time, an elementary school in the district was also closed.   It was another fire trap.  Those students were shifted to the junior high.  The junior high students shared the high school with us.  Older kids went in the morning.  Younger ones had the afternoon.

I loved it.  First, it got me out of a dangerous building, a building district management thought was just fine, thank you.  It was sickening.  Second, it was less time exposed to a soul crushing atmosphere with a mostly disconnected and uninspired faculty.

Here's where I benefited even more.   I lived close to the Penn State campus in Dunmore.  There were many visits to its library during my free afternoons.  Yes, a real library with real research materials-- not that joke of a library at my high school.

I asked a few Wyoming Valley West kids what they will do with their afternoons.  The responses:  sleep, hang with friends, and play video games.  I nearly wept.

Wyoming Valley West students:  go to the library.  Kings, Wilkes, Ousterhout and Hoyt are close.  Read something.  Write something.  If your teachers don't have the time or inclination to look at it, send it to me.  I'll read it or pass it along to one of my teacher friends for a critique.  Heck, I might even publish it here.

I'm not stupid.  You need some fun and goof off time, especially before winter arrives.  But, please make the effort to learn something during your free afternoons.  You won't regret it.
AT 12:00 AM