I once worked for a very wise news director who advocated getting an early jump on stories.  He reasoned that if you start late, it's tough to make up that time as you move through your work day.  I think of that often.  Most mornings, I'm up before the alarm clock goes off.  It gives me time to check WNEP.com, emails and scattered other news sites.

I was up extra early Sunday night, punched up WNEP.com, and saw there was a homicide at Sherman Hills housing complex in Wilkes-Barre.  I instantly knew where I would spend my day.

We set up in the police station parking lot for Newswatch 16 This Morning.  It was nuts and bolts stuff.  Police weren't saying much.  There is often an adversarial relationship between police and the media, but we really could have helped here.  Description of suspects, getaway vehicle, etc.  Police didn't supply it.  We did pass along their request for witnesses to come forward.  Let's talk about that for a moment.

If and when the killer is caught, the affidavit of probable cause should be interesting.  Police say there were others in the area at the time of the shooting.  Even though their identities will be protected, I'm skeptical when it comes to the concept of homicide witnesses volunteering information.  Fear is a big motivator.  It can propel you to do something.  In a case like this, it can steer you toward NOT doing something, and that something is helping police. 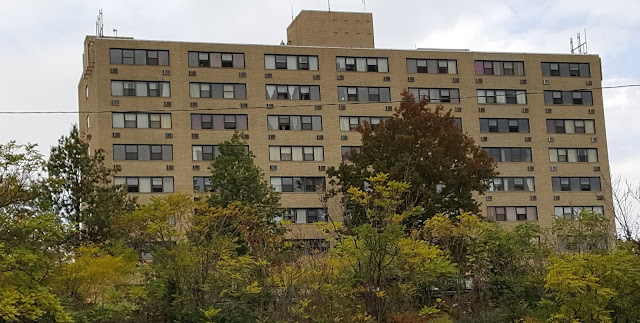 After the morning broadcast, we packed up the truck and went to the Sherman Hills neighborhood to see if people still feel safe.  After a wave of violence a couple of years ago, a task was formed to tackle the problem.  I suspect it was a lot of public relations and not much action.  Residents I spoke with say it has improved, but complacency is setting in.  Sherman Hills is slipping back to the way it used to be.

One resident blamed New York and New Jersey people for the problems here.  That may be true, but I'm sure some locals are to blame as well.  I should point out that the coroner's office said the homicide victim is from Far Rockaway, New York.

As we were parked on Coal Street, a few people driving by yelled "shut it down."  Yes, any time there is a problem here, they are calls for closing Sherman Hills.  Would that solve the problem, or just move it somewhere else?  What about all the Sherman Hills people who follow the rules and abide by the law?

I'm reminded of O'Karma Terrace.  That's the Wilkes-Barre housing project that had its share of Sherman Hills type problems several years ago.  The name was changed to Boulevard Townhomes.  It was cleaned up, and it's now generally trouble free.