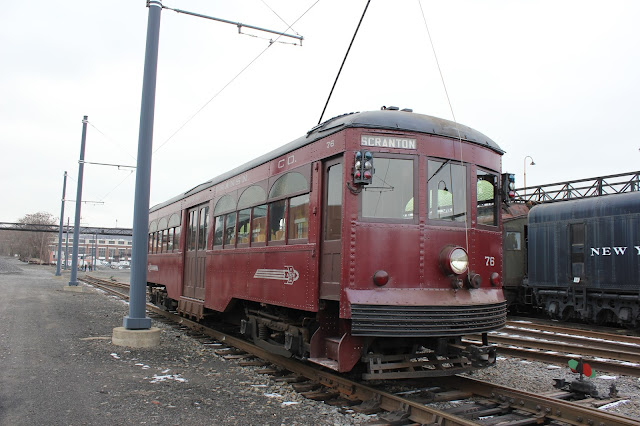 Admittedly, I didn't take a lot of pictures in January.  Any time I had an opportunity, the weather was lousy.

Even though it was cloudy and drizzly, I did visit Steamtown last week.  I felt the itch to take some photos, and it's been a while since I inflicted train photos on you.

Steamtown is a great place, but let's face it.  It doesn't change much.  I lucked out on last week's trip.  There was a trolley out toward the South Washington Avenue side of the yard.  They are barely visible in this photo, but off to the left, there were a few men with papers and files.  It looked like they were doing something official, and shortly after I snapped a few trolley photos, the car backed out toward South Washington Avenue.

Trolleys are a big part of our history, and it's great that we have a Trolley Museum as well as some scattered trolley rides.  Unfortunately, the trolley line isn't all that visible.  I know money is always an issue, but wouldn't it be great to see the line extended to an area where people can actually see it?

Speaking of visibility, the Steamtown National Historic Site has to be the toughest federal property in the country to find.  It lost some sign space when the new intermodal transportation center was built.  The place clearly needs more signs than it has now.
AT 12:00 AM