Fellow blogger Joseph Peter Klapatch informed me that today is the 40th anniversary of one of the happiest days of my life.  One of my schools was condemned.

I was a sophomore.  We had classes in two buildings across the street from each other.  One was purely high school.  The other was half elementary and half high school.  The pure high school building was hideous, and that was the better of the two.

The state condemned the other building because of oil soaked wooden floors, open stairwells, and a stench in the lavatories.  A fire during school hours would have left dozens dead, and that was the state's estimation, not mine.

My first exposure to this hell on earth was the 6th grade.  I had a teacher I didn't like in a building I hated.  It was either too hot or too cold.  Our playground was a paved alley in the back.  No gym.  No cafeteria.  No library.  No labs.  No parking.  We were big on depression.  I remember discussing educational alternatives with my parents.  I just couldn't see myself in a Catholic school, so I toughed it out with a teacher who used the same methods on his first day on the job as he did on the last.  By the way, nothing against Catholic schools.  They are fine institutions, but they weren't for me at the time.

I vividly remember the day one of my friends got caught playing with a lighter in one of the bathrooms.  I wasn't there.  I didn't see it.  You should have seen the way everyone panicked.   They knew, in the backs of their minds,  the building was a disaster waiting to happen.  Outwardly, it was denial all the way.

The true tragedy here was the people running the district at the time kept telling us these buildings were just fine, thank you, and there was no need to build new.  They believed the place was a palace and we were lucky to be there.  A privilege to be wandering those halls and classrooms.   With the backward thinking and complacency in that district, it's a wonder we graduates went to college and found jobs.  It was culture of negativity and failure.  We, as a district, were laughed at.  It was years before the kids had decent buildings and the football team had a stadium of its own.  I was long gone by then. 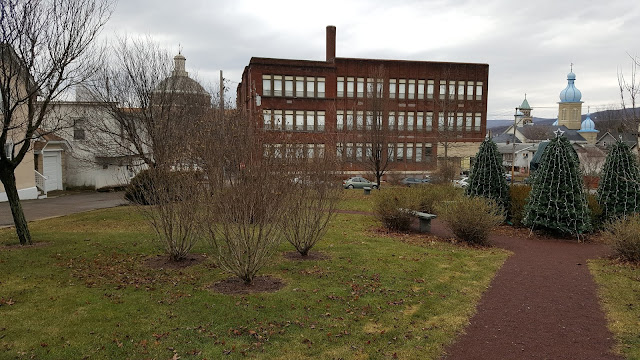 Above is the prayer garden/park where the condemned school once stood.  The alley that served as our elementary playground is off to the left.  The brick building with all the charm of a state prison or a third world sweat shop is the former senior high, now apartments for the elderly.  A church did a nice job turning the old school plot into an asset to the community.  My personal preference would have been to burn down the building, cart away the remains, and plow salt into the earth so nothing grows there ever again.

So, why was I happy when the state padlocked the place?  I should add that, at around the same time, a school in another town, in the same district was condemned.  We doubled up.  Senior high used the one barely passable building in the morning.  Junior high students had it in the afternoon.  My "home room" went from the top floor of the fire trap, to the basement of the building next door.  It used to be the weight room for student athletes.  Weights were moved out.  Desks were moved in.  It stunk, literally.  Years of sweat permeated the floors and the walls.  Nauseating.  I've mentioned it here before.  The half day sessions were the best thing that ever happened to me.  First, it was less time in that soul crushing atmosphere.  Second, I used part of my free afternoons to read and go to real libraries at near by Penn State and Marywood.  Those half days lasted through half of my sophomore year and all of my junior year.  The district finally rented enough space in other buildings to end half days when I was a senior. 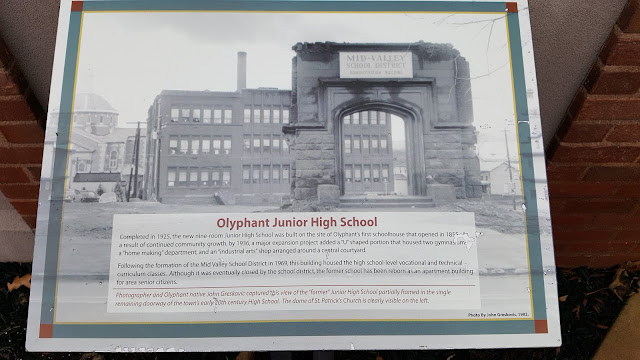 The condemned building was torn down decades ago.  The remaining building is now apartments for the elderly.  I still pass through that neighborhood on occasion.  My stomach tightens ever time.

I don't expect to be asked to speak at this year's commencement, or any one until the end of time.