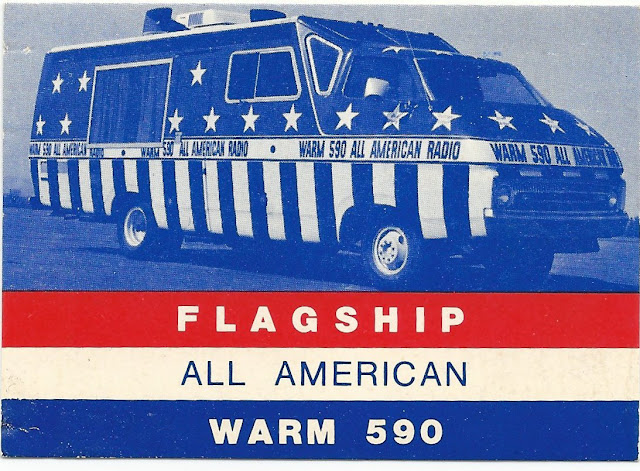 The card is from a collection WARM put out prior to my arrival.  All the DJ's had them, and so did the vehicle you see above, "The Flagship."  It was a studio on wheels.  It's tough to see from the pictures, but each of the DJ's had their name on one of the stars.

The Flagship was still around by the time I arrived.  It was painted differently, and it had clearly seen better days.  In fact, I was the last one to drive it.

This wasn't from that last day, but I showed up at the station one weekend afternoon, outside of my normal work hours.  One of the DJ's, Steve St. John asked what brought me to the station.  I replied that I was assigned to take the Flagship to some show at the Kingston Armory.  I will never forget Steve's words:  "Someone is going to get killed in that thing one of these days."  Thankfully, it wasn't me on that particular day.

I do remember pulling an overnight shift, then taking the Flagship home, because I was driving it in the St. Ubaldo parade later that day.  It saved me a trip back to the station, in the opposite direction.  Bill Kimble was the program director at the time.  When I asked for permission to take it home, he said yes and added it was okay "as long as I could guarantee the security of the Flagship."  Are you kidding me?  Who would want it?  It was on its last legs, and most of the equipment inside didn't work.  I live on a hill, and my major fear was having it roll away during the nap I took after my overnight shift and prior to the parade.  I didn't sleep well, fearing the worst.  Luckily, there were no problems on that day.  The only issue was in an Interstate 81 construction zone.  The Flagship didn't handle well, and it was a tight squeeze through the construction barriers.  I made it without a scratch.

And then, there was the end.  I had another Saturday Flagship assignment.  I don't remember where I was, but I was on Interstate 81 north, heading back to the station in Avoca.  Around Dupont, it started making awful noises and the engine stopped.  I had enough momentum to make it over to the shoulder.  I don't know how I got back to the station.  I tried calling managers.  No luck.  This was the era before cell phones and e-mail, so I was stuck-- and so was the Flagship.  It sat along the Interstate all weekend until someone arranged for a tow on Monday.  Embarrassing?  Absolutely.  My hands are clean.  Due diligence, and no one in management said a word to me.

I later learned the engine was missing something important-- oil.  It either all leaked out unexpectedly or no one bothered to check on a regular basis.  I suspect the latter.  The engine was shot.  It would cost a fortune to replace.  The Flagship was old and wasn't worth it.  If memory serves, the carcass was sold to someone in Wyoming County.