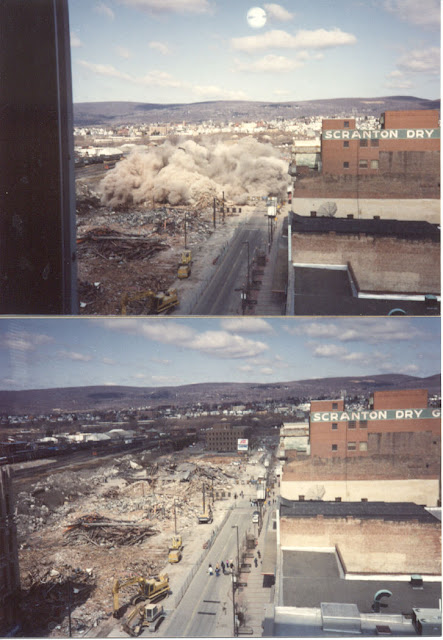 Last week marked the 25th anniversary of the implosion along Lackawanna Avenue in downtown Scranton that made way for the Mall at Steamtown, now the Marketplace at Steamtown.

Above are two photos I took that morning, as I broadcast from what used to be the First Eastern Bank building at Lackawanna and Washington.  I've been doing this a long time.  it was terrifying at the time because our broadcast had some technical issues.  Looking back, it was one of the most fun and rewarding days of my career.

I cannot walk through that mall without thinking of implosion morning, the grand opening, all the stores, and all the promise that mall once held.  Things have changed a lot over the last 25 years.  should the mall have been built?  Hindsight says no, but at the time, it was the best idea on the table.  Sadly, no one was interested in restoring those buildings and no one wanted to come up with the money to do it.

Thanks to those of you who responded to last week's query about the name of the original toy store in the Viewmont Mall.  It was "Kids" before it was "Kay Bee."  "Kids" packed a lot in to a small space.  It seems there was something for everyone-- science to fun, and all ages.  I haven't been in a toy store in years.  I'll have to check out one of the big boxes to see how things have changed.