I fired up my computer Sunday night and learned WILK's LA Tarone had died.  Lung cancer.  58.  We did a short piece Sunday night and on the Monday edition of Newswatch 16 This Morning.  My assignment for that broadcast was a preview of the last minute state budget negotiations.


When the broadcast was over, it was time to shift gears.  There would be no new budget news until the afternoon, so I suggested a piece on Tarone's passing.  He was in your home, and rode along with you in your car for a very long time.  Before his WILK days, Tarone was on WYLN, a Hazleton TV station, and he wrote for the Hazleton Standard~Speaker newspaper. 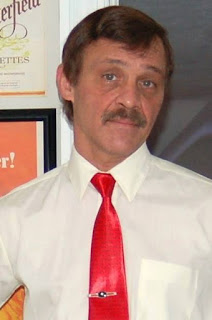 I texted program director Nancy Kman for permission to stop by and talk.  Granted.  Photographer Corey and I arrived a little after 7 AM.  We recorded some phone calls, got our hands on some of LA's old radio shows and Facebook photos.  I interviewed Nancy and morning co host John Webster during commercial breaks.  We had more than enough material.  We also had some time, so Corey and I waited for mid day host Sue Henry to arrive.  She knew LA for more than thirty years, and was with him when he passed.


Sue came in a little after 8.  I asked if she wanted to talk.  She agreed, and Sue shared some nice memories.  We should all be so lucky to have someone say such nice things about us when we pass.


It was then time to head back to the station to put together a piece for our noon broadcast.  I never met LA Tarone.  When you are doing an obituary, there are times personal knowledge is a huge help.  Thankfully, the WILK staff was generous with their memories, and the piece came together rather nicely.


I've known most of the WILK staff for a very long time.  I have to note that I love my job and WNEP treats me very well.  However, I love being in radio stations.   Radio was my first job.  I'm fascinated by how things work, how the equipment and procedures have changed.  Regardless, watching people communicate, the intimacy, the immediacy, is always a draw.  Plus, the WILK staff are good people.


When Corey and I got back to the station, I reviewed the interviews and chose the best parts.  It wasn't easy because there were so many interesting answers to my questions.  It didn't take long to write the story, but I did take some time arranging the elements into the order I felt worked best.  There were three versions before I settled on the final one.  As I was doing that, Corey was listening to the sound of the WILK callers, and the archived material from Tarone's shows.  He picked some great segments that illustrated what LA Tarone was all about.


I should also note that our noon producer Monday, Tanya, afforded me a little extra time to tell the story.  It really helped.  You really couldn't sum up LA Tarone in 90 seconds.


Thanks to the WILK staff for their help and the kind words on Facebook.  My sympathy to LA Tarone's family, friends, and fans.