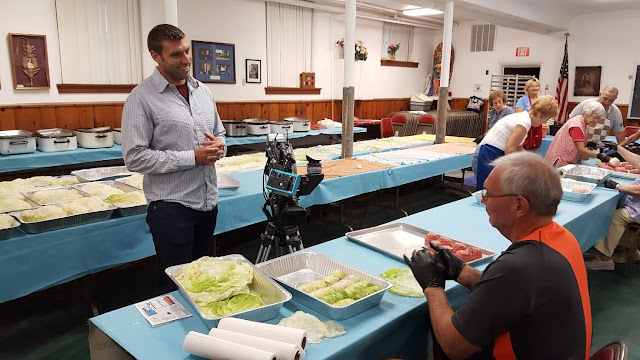 My name is on the story, but the story also belongs to the photographer.  Corey Burns shot the Monday morning pigs in the blanket making story at St. Mary's Church in Mocanaqua.

Corey came armed-- his usual news camera, plus two wireless microphones and a tiny Go Pro video camera.  Time is usually our enemy, but is actually on our side that morning.  The piggy making operation began early.  All the activity was in one place.  Mocanaqua is an easy drive.

Corey stuck a wireless microphone on one of the volunteers.  She was nervous at first, but eventually loosened up and didn't even remember the microphone was there.  The Go Pro got some tight shots.  Corey's other camera took care of the rest.

I did some interviews and a short on-camera piece.  It was then back to the station to write and edit.  On the way back, we talked about our vision for the piece.  Once we put the video in the computer system for editing, I asked Corey if any "nat sound" popped out.  A couple of pieces did.  Inside baseball:  nat sound is non interview sound-- candid conversations, sound of machines and activities, etc.  Corey played what he had.  I liked one piece.  Corey favored another.  Thankfully, Newswatch 16 at Noon producer Teresa gave us time to include both.

As I've noted earlier, I'm exceptionally critical of all my work.  This one came out great.  Thank you, Corey and the piggy makers of Mocanaqua.
AT 12:00 AM