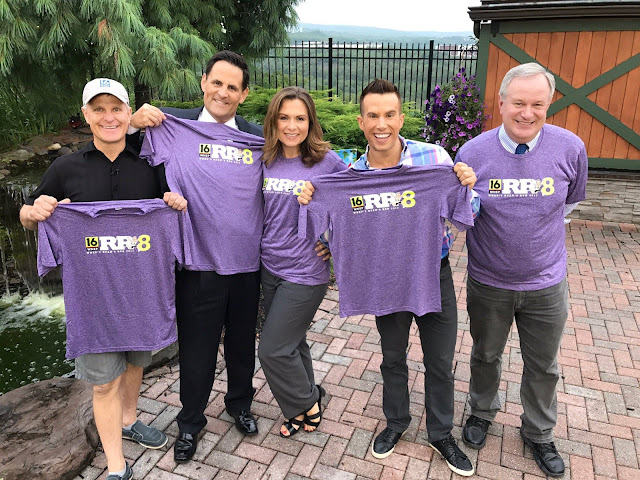 I shared this photo on my Facebook page the other day, but I really didn't have much to say about it.

This is a rare photo of the morning team, in the same place, at the same time.

It's an interesting dynamic after the broadcast ends each day.

Tom and Mindi are usually at their desks, going over the past broadcast and thinking about the next day's effort.

Joe is over in the weather office, either working on the noon forecast, or making some graphics for the next day.

I'm usually at my desk, or out on the road.

Ryan is either still out on the road, or camped in an edit room.  He's always putting together a piece for the afternoon broadcasts and thinking about how the next day's morning news will work.

Tuesday was an off day.  The planets aligned.

I was over in the Tom and Mindi area, talking with them about some of the news stories we'd been covering.  Ryan approached.  He grabbed Joe.  We all headed out into the backyard and Corey Burns snapped the photo.  I was originally in the middle, but I thought the key slot should go to Mindi.  I should have nudged closer to the rest.  I seem rather aloof on the side, which was not my intent.

You see, we all work in the same place, and at the same time.  Getting us together isn't as simple as it might seem.

By the way, it's a great shirt.  I wore mine to the gym Wednesday morning.

Good luck to Ryan and everyone else involved in this year's run.
AT 12:00 AM