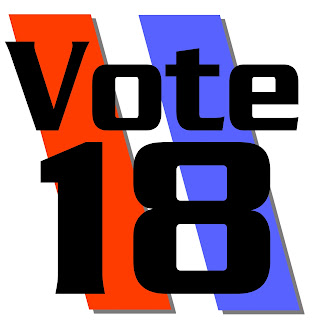 I didn't think I'd be making a Vote 18 graphic so quickly, but Lou Barletta's entry into the race for the Republican nomination for United States Senate prompted today's entry.

Barletta made his announcement yesterday via internet video, and that seems to be the thing to do these days.  Regardless of candidate, political race and party, I miss the old days of ballrooms and balloons, and bunting and music.  Internet announcements are effective.  They're not fun-- and we don't get to ask questions.

It's too early to handicap the race.

Barletta's plusses include a loyal base, and a base that votes.  His attachment to President Trump could help.  It could hurt.  Assuming Barletta gets past the primary, the general election is still more than a year away.  The Trump factor is an unknown right now.

The incumbent, Bob Casey is a proven vote getter and a proven money raiser.  Expect to see a lot of money pumped into this race-- on both sides.  This one will be costly.  Casey sits on a big base of votes in Philadelphia-- but he has to find a way to make sure those people go to the polls.

The only thing safe to say is it will be an interesting 435 days until we go to the polls.