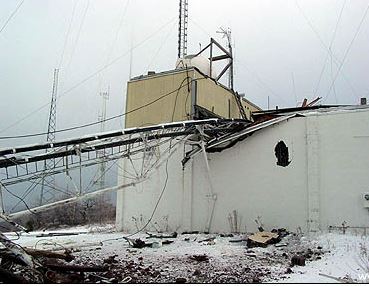 It happened ten years ago tomorrow-- the WNEP tower, atop Penobscot Knob in Hanover Township, collapsed in an ice storm.

Yes, I was on the air when it happened.

The roads were bad that morning.  My friend and coworker Ryan Leckey was doing live reports for Newswatch 16 Sunday Morning.  Just before 7 AM, we lost the signal from Ryan's truck.  We were still using two way radios to communicate with crews, and that system went down as well.  You see, the tower held more than the broadcast antenna.  It was also our microwave receive location, and our two way radio antenna had a spot on the tower.

Suddenly, the on-air signal disappeared.  No microwave signal getting back to the station from the truck, no two way radio.  The phones started going nuts.

Renie Workman was working the assignment desk that morning.  I joked "Maybe the tower fell down."

It turned out to be exactly what happened.

I don't remember this part, but our audio guy that day, Joe Frischman, swears that before the tower collapsed, I said something like "This is the kind of weather that brings down towers."

For my next trick, here are tonight's winning lottery numbers...

Seriously, even though the tower was in a heap up on the mountain, we were still getting a signal out.  The larger cable companies had a direct feed of our programming.  They took it from a dedicated line, not a tower.  I had to go "on the air" and explain what happened.  It was new ground for everyone involved.

C. Lou Kirchen was our general manager at the time, one of the best I ever worked for.  She had an army of people in later that day to cover the story and to take calls from concerned viewers.

I had the job of producing the Monday morning newscast, one of the most unusual ever.  It's strange when your own company is the top story.

Our engineers worked overtime, getting a temporary antenna up and a back up transmitter fired up.  We didn't have the greatest signal for a while, but at least something was out there.  It was gratifying to learn how many viewers rigged up antennas and ways to receive the station.  Loyal fans.  Thank you, then and now.