This all started a couple of weeks ago.  I was scheduled to work my usual Monday morning shift.  After giving it some thought, I went to the boss and reasoned that New Year's morning is traditionally very slow.  I should come in late New Year's Eve and cover that new Lackawanna County New Year's celebration in downtown Scranton.

The news director gave my plan the green light and added that I should wander in even earlier so I can do a live report for our late night broadcast on December 31st.

Temperatures plummeted.  Downtown Scranton outdoor activities were canceled.  I arrived at the station Sunday night.  Producer Tanya and I talked it over.  We wanted to do something where weather was part of the story.  Scranton's celebration was nice-- but indoors.  After a short discussion, photographer Faye was asked to load up a satellite truck.  We were going to Pottsville!

For the last ten years or so, Pottsville has been lifting a giant Yuengling bottle in Garfield Square.  While the celebration was shortened because of the cold, it was still on, and still outdoors.  We arrived a little after 10 pm, and I got a sick feeling in my stomach.  The square was empty!  We assumed that, because of the cold, people would arrive close to midnight and leave shortly after.  We were right. 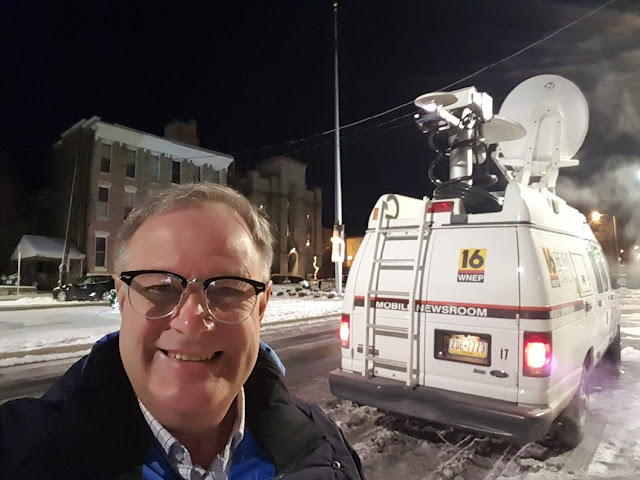 I was live on Newswatch 16 at 11.  A decent sized crowd arrived.  We talked to people before and after midnight.  Yes, it was brutally cold, but when you're busy and having fun, you really don't seem to mind.  We finished about 12:15 am, and it was back to the office.

The people in Pottsville were great.  They really enjoyed themselves, and they were happy their event received some TV recognition.

Below is a photo of the Yuengling Lager bottle at the top of the flag pole. 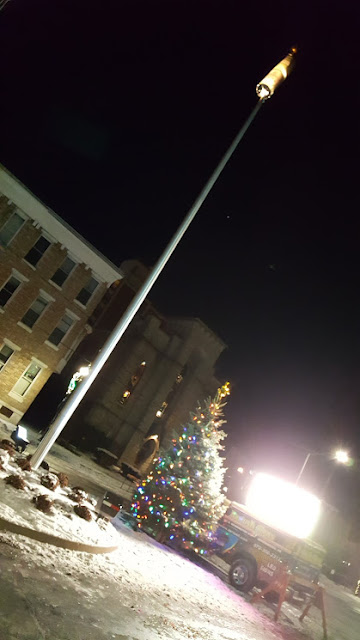 Photographer Faye had a long day, so photographer Jason edited one of my pieces for Newswatch 16 This Morning and photographer Erich handled the other.  I made it home a little after 6 am.

After a cat nap, it was on to do one of my favorite New Year's morning activities-- shopping.  There are always plenty of sales, especially winter clothing, and stores are empty.  This year was no exception.  Major problem:  I couldn't find anything I wanted or needed.  It was still nice to get out for a while.  Cabin fever is setting in early this year.