I Read the News Today 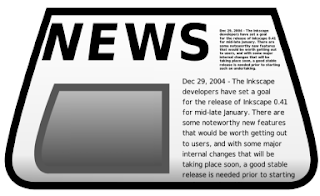 I love newspapers.  While the internet versions are great, I still enjoy hearing the thump of the paper arriving on the front porch in the morning, taking off the rubber band, and seeing what's new in the world.  Yes, I've already seen most of on the internet, but the print version has such charm and memories.

I don't know when the fascination started.  I suspect visiting some of those old downtown Scranton newsstands as a kid played a role.  The smell of the newsprint, rack after rack of out-of-town papers.  The fascination became cemented a little later.  You could get the morning paper late at night, in an edition called the blue streak.  The afternoon paper published editions  beginning just after noon.

Visiting an actual newsroom was a great joy.  The haze of cigar and cigarette smoke in the air, the rumble of the press below, the sound of typewriters in the room and the teletypes in an adjacent room.  Again, that smell of newsprint and ink.  It was magic, and I'm sorry people getting in to the business no longer have that experience.  Yes, I can do without the smoke.

As I got in to the business, I marveled at the work of newspaper reporters.  Broadcasters are generalists.  The print people had to get every detail, and while covering the courthouse, I watched them bang it out under deadline pressure.   Some of the older guys knew every person in power, knew where every body was buried.  I was in awe.

There are still a couple of "must read" columns in newspapers near me.  I wish there were more.

Having built that foundation, the newspapers I love don't love me back.  They are thinner than ever.  Big photos and big graphics disguise a decline in content.  Prices are up.  There are rumors some papers will stop publishing seven days a week.  Another might disappear altogether.  Papers in adjacent cities duplicate content.  There are circulation problems.  As I've noted here before, one paper has a major problem getting its product on the streets.

Entire generations are growing up without experiencing the power of print.  I was lucky.

One other note before I close.  Hugh Wilson died Sunday.  74.  Wilson created "WKRP in Cincinnati."  Most in the business called it the most realistic sitcom about radio-- ever, and I have to agree.  I alsays thought "WKRP" was inconsistent, but when it was funny, there was nothing better out there.