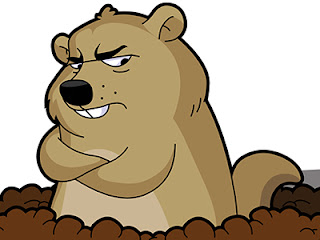 The yearly ritual takes place tomorrow.  Punxsutawney Phil comes out of his burrow and predicts an early spring or a longer winter.

Regardless, it's only early February and several more cold and snowy weeks are in our future.  In fact, some of our biggest storms have hit us during the tail end of winter.

Be that as it may, Ground Hog Day is a nice milestone.  Winter is half over.  The way I look at it, the three coldest months of the year are December, January, and February-- so, in my book, we hit the half way mark January 15th.

We had some brutally cold days, an ice story and a couple of run of the mill snow storms.  It could have been worse.

Remember, it's still quite a way before the flowers are in bloom, but the end of winter is in sight.
AT 12:00 AM