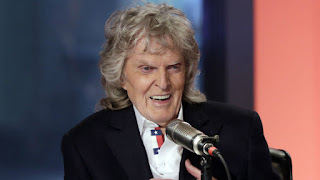 Don Imus retires from radio today, and you know what?  It's time.  Imus is 77.  His cranky old man radio show has become unlistenable.  Apparently, a lot of people agree.  WABC's ratings are in the tank.

I've seen him in action.  While Imus has a ranch for children with cancer, he simply does not appear to be a nice person.  He demeans staff.  He talks down to visitors.  Enough.

I will give Imus all the credit in the world for being a break through shock jock, and there were many, many times he was outrageously funny.  None better.  I will offer even more credit for transitioning from that Top 40 jock in to a very good political talk show host.  Imus proved politics and news doesn't have to be deadly dull.  He asked good questions and he succeeded in getting quite a bit out of his guests.  for years, it was "must listen" radio.  Very few shows are in that category.

Imus was fired from WFAN and MSNBC for an attempt at humor that inflected hurt on a bunch of college kids.  He returned to radio several months later, but it was a different Imus.  Most big name guests stayed away.  He just wasn't funny.  The joy was gone.  The show became a chore.

I hope you had a chance to see the Imus piece Anthony Mason did on "Sunday Morning.".   It was a well done profile, showing the softer side of Imus.  By the way, Mason is one of TV's underrated talents.


Imus did irritate me when be belittled Paul Harvey's Marconi awards because he was only on three minutes a day.  for the record, Harvey did a 15 minute midday broadcast, and he was always outstanding.

As I said at the top of this piece, it's time to go.