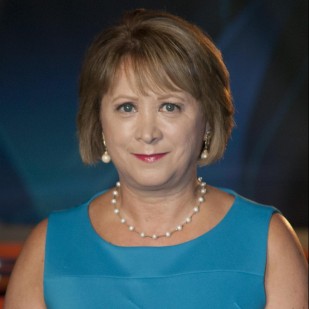 Christina Brown, an absolutely lovely and talented woman, was weekend morning anchor back then.  I was the broadcast's producer.  After a few months of Noreen and Christina, news director Paul Stueber thought the weekend morning broadcasts would work better with a co-anchor and I was enlisted.

That lasted for eleven months before Christina decided to change careers in 2000.  It was too bad.  It took us a while to figure it out, but we eventually hit our stride.  I solo anchored for a while before the new producer went on maternity leave and never returned.  I have been producer and anchor for a long time now.  No complaints.

Noreen retires after tomorrow morning's broadcast and things will never be the same.

I could set my watch by her arrival.  I would hear the electronic door lock click, and Noreen would come bounding in the door at 100 miles per hour, full of energy and enthusiasm.  She never mailed it in.  Noreen would go over every aspect of the forecast, very detail oriented.

Noreen was also a team player, pitching in to answer phones when we were short handed.  Duties have changed over the years.  We added social media, and radio, and Amazon Echo.  New technology is always a challenge.  Noreen adapted.

I'll admit that we had a couple of battles over the years.  No couple, together for 20 years, like Noreen and I, get along all the time.  We would always bury the hatchet quickly for the sake of our friendship and the broadcast.  The viewers come first.  In spite of the bumps in the road, I consider Noreen to be a dear and trusted friend.  She was always someone to talk with, when things weren't going well, personally and professionally. I value that.