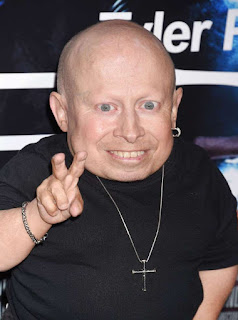 Actor Verne Troyer died over the weekend.  49.  He was a troubled man, and I am sorry.

Today's entry is less about Troyer and more about my friend and former co-worker Bob Reynolds.

Bob left no stone unturned while in pursuit of a story.  I constantly marveled at his thoroughness and enthusiasm.

Many years ago, Bob was working the WNEP assignment desk when we received a rumor Troyer was dating someone with ties to the up-valley of Lackawanna County, and he was spotted in the area.  If I remember right, it was Jessup, but it could have been any of the surrounding communities.

Bob called every business in the area, every mini mart, gas station, restaurant, etc., to see if there had been any Troyer sightings.  Remember, this was before the lunacy of Facebook, Twitter and assorted other social media.  It was a time consuming and painstaking task, and Bob really wanted that story.

Unfortunately, Bob came up empty.  I'm not sure if the story was true, or if Troyer managed to fly under the radar during his short stay here.  Bob tried, and tried hard...  and that is why I will always think of Bob Reynolds when Verne Troyer's name comes up.