The Geek in Me

This is something very few people will understand but I'm on vacation and big issues can wait for another time.  yes, I will admit that it is strange I'm so fascinated by these things.  Let's start with some history.

I used to vacation quite a bit in Baltimore back in the 80's and 90's.  It was far without being too far, and it was affordable.  I'd get a hotel just outside the city and venture in to the Inner Harbor for a couple days.  Time would also be devoted to exploring the suburbs, the malls, and occasional trips to Washington and Annapolis.  I'd visit friends in Harrisburg either on the way down, or on the trip home.

A few things stopped that.  First, urban sprawl really wrecked my quiet little hotel area in the suburbs.  I happened to be in Baltimore on 9/11.  I went back the next year for my annual September vacation.  It wasn't fun.  Too creepy.  Too many bad memories.  I never returned.

Now that I've established the foundation, I'd always make sure to tune in the Baltimore TV newscasts.  WJZ was the big dog in town, and the staff there did a great job.  WBAL and WMAR also put on solid newscasts.  There were a couple of affiliation switches over the years, the latest in 1995.  WBAL really benefited from hooking up with NBC, the hot network at the time.  WJZ became a CBS station.  CBS had some issues back them.  WMAR went from NBC to ABC.

To put it delicately, WMAR is having problems gaining traction.  There was a logo switch last week. 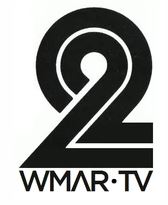 Above was the one I saw during my visits.  A little tired, a little dated, but I liked it and I thought WMAR had some really good anchors and reporters.  There were radical logo and talent changes in the years that followed.

Below is the new old logo.  Management calls it the "heritage 2."

I like it.  Fresh look, but still reminiscent of the classic 2.