It's the American way.  Someone is always coming along and trying to do it better.

I grew up with The Globe and Scranton Dry (later Oppenheim's)-- big downtown Scranton department stores.

Then, it was Viewmomt Mall and all the stores around it.  Another nail in the downtown coffin, and Keyser Oak was no longer the fun, new kid on the block.

While Viewmont appears to be doing semi-well, other malls aren't.  Big department stores are either downsizing or going out of business altogether.  Wyoming Valley Mall lost two anchor stores in one week, and the last of the anchor stores is clearing out of Lycoming Mall, near Williamsport. 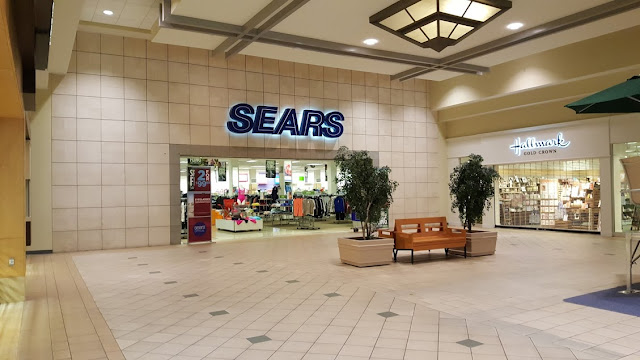 Above is a photo I took last week, during a visit to the very tired and dated Wyoming Valley Mall.  As I walked through Sears, all I could think about was "This could be the last time I'm ever in a Sears."  It didn't look bad.  Nothing special.  No reason to go out of your way.  The store closes before summer.

As for the department stores... many simply look shot.  They cut back on staff.  Shelves aren't organized.  Why rummage for sizes in a messy shirt department when I can go on-line, find what I need in seconds, and have it delivered to my front door?  No one is around to help.  Customer service is dismal.

It is said those "lifestyle centers," like the Shoppes at Montage, took a big bite out of the malls.  No need to wade through all that mall real estate when you can park at the place you really want to visit.

The Schuylkill Mall has been bulldozed.  Other than that, the Mall at Steamtown appears to be our area's other biggest retail failure.  For a while, it was mostly empty.  Now, it's a college campus, medical office, department store and a weekend flea market type operation.  Kudos for trying to morph in to something contemporary, although I'm still hearing horror stories about the parking.

By the way, I had my first experience with the new ticked parking system last week.  A clerk at Boscov's explained it to me.  You get one ticket when you pull in.  You get a second in the store.  They look exactly alike, except for a little red "2" at the bottom of the second ticket.  I had to put on my glasses to pull out of the garage.  Really.  Make the ticket different colors.  An attendant was stationed at the exit to guide people through the process.  It really wasn't that difficult.  I breezed out in seconds, but then again, I was there early in the morning.  I shudder to think at what will happen on a big day, like Black Friday.

The bottom line is the strong survive.  The innovators prosper.  I recently wrote about a walk around Bon Ton in Wyoming, an okay, clean and organized store-- but I couldn't tell whether it was 2018  or 1988.

Once you stop trying to do it better, the ball game is over.