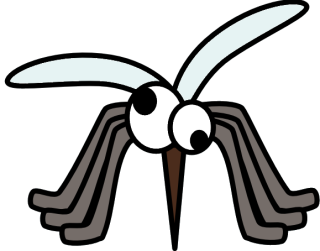 The assailant?  A mosquito.  The remedy was almost as bad as the attack.

I was minding my own business and putting the finishing touches on Newswatch 16 Sunday Morning when I felt a bit of pain.  A mosquito got me, not once, but four times.  Two bites were on the back of my neck.  One on the chin.  One in the sideburn area.

I was developing some swollen bumps.  Rubbing alcohol didn't help.  It was time for serious stuff-- an antihistamine.

It relieved some of the pain, and the swelling subsided.

As you probably know, antihistamines have side effects-- namely, dry mouth and drowsiness.  Both can be troublesome for a news anchor.

I kept a giant cup of iced tea under the anchor desk.  Sips of diet cola helped during the breaks.  I made it through the four hour broadcast.  It wasn't easy.

Mosquitoes are one of the worst parts of summer.