We'll begin the week with another Marywood memory.  Relax.  The month is almost over.  I'll be done soon.

Someone recently mentioned the name of Dr. George F. Perry in the comment section of my Facebook page.  Dr. Perry was head of the communications department during my stay.  I promised a blog entry, and here it is.

Let me describe The Doctor.  Soft spoken, well mannered, always looked great.  I don't think I ever saw him with a loosened tie.  To a long haired rock and roll disc jockey, my initial impression was stuffy and more than a bit intimidating.  He was my adviser.  I think we met once in the advisory role at the beginning of my four years, and again a couple of years later when I added a minor in public relations.    I never needed his services other than that.  Nothing personal.  Scheduling and related matters really didn't require a lot of help.

I did see Dr. Perry aggravated and annoyed only a couple of times (never at me).  I never saw him lose his temper.

Below is a very old George Perry photo I lifted from Marywood's Instagram site. 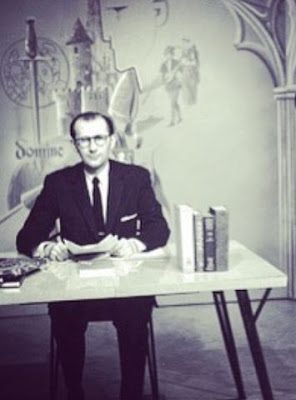 I had several Dr. Perry courses.  While I can't say they were great fun, I will say, without a doubt, that I learned.  That's what it was all about.  Conventional wisdom was that Dr. Perry merely tolerated the radio and TV people.  He really favored the theater majors.  While he might have liked them more, radio and television were never neglected.  He was always there for us.

Now, the really good stuff.  You had to do a senior project in order to graduate.  In my day, that was a 60 minute radio program, a 30 minute TV program, or a long paper.  I chose the paper, the only one in my class to do so.  I believe I was the only one to do that in years.  Why?  Well, self confidence was never my strong point.  Undertaking those other productions required the help of several classmates.  While that wouldn't be a problem, I preferred working by myself.  It was the paper for me.

Dr. Perry approved the topic.  I wrote it and submitted it.  It was more than 50 pages.  Typed.  Remember, this was the day before computers and word processors.  We met toward the end of my very last semester to talk about it.  The grade:  "A"  The talk was open and honest.  I will never forget it.  I said "Dr. Perry, a lot of people here think I took the easy way out by writing the paper."  His response was that I didn't,  and he added, "Some people took the easy way out in their projects, and I nailed them."  I nearly fell out of my chair in Dr. Perry's little office in the Fine Arts Building.
While it was a major compliment and I appreciated it, something bothered me.  It still bothers me to this day.  You finally discover how nice someone is, how cool, upfront, and honest they are, just as they are about to leave your life.  It's happened before.  It never fails to frustrate me.

Dr. Perry retired in 1991, eight years after I graduated.  He passed away several years after that.  I think I've done some really good work over the years, especially in recent years.  Dr. Perry is partially responsible, and I'm sorry he's not here to see it.  I'm very sorry that I didn't say thank you.
AT 12:00 AM